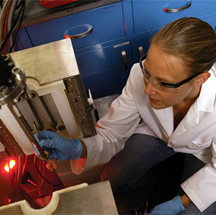 The University of Notre Dame has established theNotre DameEnergyCenter, an initiative that unites researchers devoted to developing new energy technologies to meet a compelling national and international challenge.

Housed in theCollegeofEngineering, the centers goal are to play a key role in energy education and literacy, the development of energy policy, and the exploration of the ethical implications associated with energy, according to its director, Joan F. Brennecke, Keating-Crawford Professor of Chemical and Biomolecular Engineering.

Although the energy center is a new entity, Notre Dame researchers have a proven track record in energy related research, developing collaborative projects in a variety of areas and garnering funding from numerous sources.

Most recently, the House of Representatives and Senate reached an agreement on the 2006 Energy and Water Development Appropriations bill, which includes funding for ionic liquids research. A total of $1.5 million has been slated for the research being conducted at Notre Dame in conjunction with NiSource Energy Technologies Inc., a business unit of NiSource Inc. Headquartered inMerrillville,Ind., NiSource is a Fortune 500 company engaged in natural gas transmission, storage and distribution as well as electric generation, transmission and distribution. Its subsidiaries deliver energy to approximately 3.7 million customers from theGulfCoastthrough the Midwest toNew England.

According to Brennecke, companies such as NiSource and many universities across the country are addressing the topic of energy.

It is such a huge challenge, that we cannot afford to have just one place working on it,she said.We need the full force of our scientific and engineering expertise focusing on this issue. At Notre Dame, we are seeking to better understand that how we utilize energy and incorporate it into our daily lives impacts everything  now and for future generations. What I believe we offer, in addition to world-class research, is the integration of research and teaching with the social, political and moral aspects of energy.

Because of its size in relation to the size of theenergy challenge,theNotre DameEnergyCenterwill focus on five areas in which University researchers have expertise. They are energy efficiency; safe nuclear waste storage; clean coal utilization; carbon dioxide (CO2) separation, storage and usage; and renewable energy resources. Brief descriptions of each follow:

Although the global energy challenge cannot be solved by improvements in energy efficiency, Brennecke believes that major advances in this area are vital in both the short- and long-term. The development of fuel cells and fuel cell catalysts (a project funded by the U.S. Army and the state of Indiana) and a project to use heat generated by industrial combustion power cycles to provide cooling (a project funded by the Department of Energy) are examples of the work under way in the Notre Dame Energy Center.

Nuclear fission already plays an important role worldwide. It provides clean electricity and is embraced by countries such asJapanandFrance. It may eventually become more important in theUnited Statesas well. The key to widespread use of nuclear energy, however, is in developing safe methods with which to store nuclear waste. Notre Dame researchers have pioneered the identification of new compounds of uranium and other radioactive nuclides, which greatly aide in predicting the mobility of these compounds in the environment. Much of this work has been funded by the National Science Foundation and the Department of Energy through the Environmental Molecular Science Institute at Notre Dame. Faculty in theCollegeofEngineeringalso work closely with researchers in the Radiation Laboratory, a Department of Energy facility located on the Notre Dame campus.

Coal is abundant in theU.S.and around the world. In fact, it is projected that there is enough coal globally to last several hundred years. Burning coal in conventional coal-fired power plants, however, causes the formation of particulates, as well as oxides of nitrogen and sulphur, which result in acid rain if released into the atmosphere. Unfortunately, since the development of plentiful and cost-effective new and renewable energy sources may yet take decades, it seems likely that the world will need to tap into its supply of coal to produce the more than 14 terawatts of energy needed to power nations and their economies.Notre DameEnergyCenterresearchers believe that using the coal supply responsibly requires reduction of atmospheric emissions, including the separation and benign storage of (CO2). For this reason, they are working to develop clean coal technologies.

The responsible use of fossil fuels in generalcoal, oil and natural gasrequires the capture and storage of CO2. Researchers in theCollegeofEngineeringhave developed a potentially more energy-efficient process to perform gas separations using ionic liquids, which are non-volatile and do not contribute to air pollution. Faculty are developing processes to remove and contain CO2 from the flue gas emitted from conventional power plants and other power-generating facilities. Notre Dame is a pioneer in the use of ionic liquids for gas separations and other energy applications.

The most abundant renewable energy resource is solar power. The sun sends 165,000 terawatts of energy to Earth. Cost and device efficiency are the challenges researchers face when attempting to harness solar energy. Building on the expertise of faculty in the Notre Dame Radiation Laboratory, the center plans to make research in renewable energy resources a focus.In the long run, 100 years from now, Brennecke says,we must be using solar energy as our main resource of clean and sustainable power.