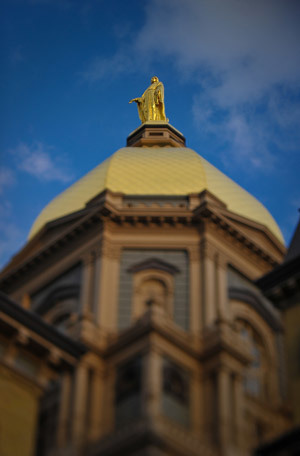 The University of Notre Dame endowment returned 19.7 percent for the year ending June 30, according to Scott Malpass, vice president and chief investment officer.

Notre Dame’s longer term results are in the top tier of institutional investors. Over the past 10 years, the Notre Dame endowment achieved an annualized return of 11 percent. During the same period, the U.S. equity market, as measured by the S&P 500 Total Return Index, increased by 7.8 percent per year, while the U.S. bond market, as measured by the Barclays Aggregate Bond Index, increased by 4.9 percent per year.

The endowment pool grew from $3.5 billion to $9.8 billion over the 10-year period. Similarly, over the past 20 years ending June 30, the endowment returned 12.5 percent per annum compared to the median return of 9 percent for large institutional investors broadly.

“I am delighted to see the impact of these returns in the advancement of the academy and student life, and especially in the financial aid resources available to our students,” Malpass said.

The Notre Dame endowment also has substantially outperformed its internal strategic policy portfolio, representing a passively indexed portfolio of similar assets, which returned 7 percent and 8.4 percent over the prior 10- and 20-year periods, respectively. On this basis, the University’s actively managed investment program created value-added of $2.9 billion over the past 10 years and $5.4 billion over the prior 20 years.