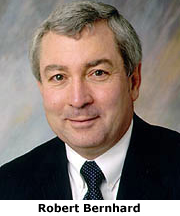 Bob Bernhard is a gifted researcher and teacher, a skilled administrator and leader, and a successful facilitator of large-scale research programs and investments,said Thomas G. Burish, Notre Dames provost.He has the background, commitment, talent, integrity and work ethic to help propel Notre Dames research efforts forward. He was the unanimous choice of the faculty search committee. We are grateful that he will be joining us and excited about his leadership of our overall research efforts.

Burish also thanked the seven faculty members of the Universitys national search committee for their efforts in attracting Bernhard to Notre Dame.

The members of the search committee worked tirelessly to identify, evaluate and recruit a strong slate of candidates for the position,he said.With Professor Bernhard in particular, who was sought out by the committee and did not apply for the position, the committee members were articulate and energetic in describing Notre Dames research vision and opportunities, and in defining its distinctive mission. They deserve much of the credit for this most successful search.

Bernhard said thebold visionof Burish and Rev. John I. Jenkins, C.S.C., the Universitys president, to take Notre Dame to the next level as an institution fullycommitted to research, undergraduate teaching and its Catholic character ispersonally exciting to me. The challenge of leading the research component of that vision is a once-in-a-lifetime opportunity that fits my background and experience very well. Im honored to be given this opportunity.

He added:Ive been at Purdue for 25 years and had a wonderful career here. Its very difficult to leave, particularly with all of the exciting new initiatives that have begun here in recent years.

Bernhard is one of the nations leading experts on noise control, with a focus on tire and traffic noise, numerical noise control design methods, noise source identification, active noise and vibration control, and machinery noise control applications. He has directed the research of 49 engineering graduates and is the co-author of more than 170 journal and conference publications on various aspects of noise control engineering, numerical methods, vibrations and design.

A graduate ofIowaStateUniversity, Bernhard worked from 1973 to 1977 as an engineer with Westinghouse Electric Co. inBaltimore. At the same time, he worked on and earned his masters degree in mechanical engineering from theUniversityofMaryland. He returned toIowaStatein 1977 to pursue his doctorate and to serve on the engineering faculty as an assistant professor of freshman engineering.

After completing his doctoral studies, Bernhard joined the faculty of theSchoolofMechanical Engineeringat Purdue in 1982. He has been affiliated with the Acoustics and Noise Control Research Program of the Ray W. Herrick Laboratories at Purdue, and served as its director from 1994 to 2004. He has been the director of the Institute for Safe, Quiet and Durable Highways since 1998 and for the last three years has served asPurdues associate vice president for research.

Bernhard and his wife, Debbi, are the parents of four children ages 25 to 16. Among his civic activities, Bernhard served on the St. Thomas Aquinas Parish Pastoral Council in WestLayfayette,Ind., for four years and was president in 2006. He was a Little League baseball coach for 13 years.

Bernhards position is newly created and a result of the administrative restructuring of graduate education and research at Notre Dame. The new structure splits the former position of vice president for graduate studies and research into two positions that will each report directly to the provost. The reorganization was recommended by the Academic Council and the president and approved by the Board of Trustees.

Bernhard will address infrastructure and support of researchthe work of faculty, graduate and undergraduate students alikeand the competition for funding dollars, as well as support for the Universitys technology transfer efforts.

A new and unnamed position in the provosts office will have oversight of graduate studies.