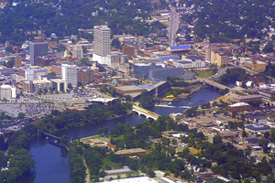 The University of Notre Dame this week made a second round of voluntary contributions to the cities of South Bend and Mishawaka, the town of Roseland and St. Joseph County as part of its $5.5 million commitment over 10 years.

“These contributions reinforce our commitment to partnering with local government leaders in order to have a positive impact in the community where we are located and where our employees call home,” said Rev. John I. Jenkins, C.S.C., president of the University. “We are confident that local government leaders know how the funds can best be used for the common good of their constituents.”

Notre Dame leaders announced the contributions in June 2009 as a way to support local governments facing extraordinary challenges during difficult economic times. The funds are being provided in increments of $500,000 in each of the first five years and $600,000 annually in the second five years. The funding levels for each government entity are provided in the chart below.

Father Jenkins said the University’s partnership with local communities is as strong as it ever has been. Long-term initiatives such as the Center for the Homeless and Robinson Community Learning Center, as well as new developments such as Innovation Park and Eddy Street Commons, have expanded the beneficial interaction between Notre Dame and the surrounding community.

“We believe there is an expectation for Notre Dame to be a leader, and these contributions are one way to demonstrate our commitment to leadership,” Father Jenkins said.
In addition to this direct contribution, Notre Dame has an annual economic impact of $873 million and accounts for more than 12,000 jobs in St. Joseph County, according to a study conducted in 2006 by the economic consulting firm Appleseed.

The analysis also found that the University annually draws more than 685,000 visitors from outside the county who spend some $114 million off campus; contributes more than 373,000 student volunteer work hours each year; and has accounted for more than $12 million over the past five years in local taxes. 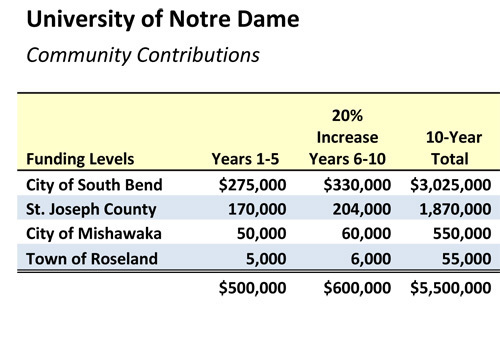