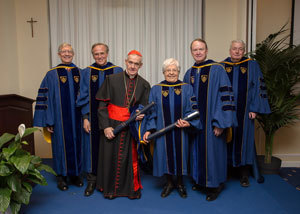 The University of Notre Dame conferred an honorary Doctor of Laws degree on Cardinal Jean-Louis Tauran and Maria Voce at the Notre Dame Rome Centre.

ROME — The University of Notre Dame on Monday (Jan. 27) awarded honorary degrees to two leaders of ecumenical dialogue and engagement of the laity at the winter meetings of the Board of Trustees in Rome.

Cardinal Jean-Louis Tauran, president of the Pontifical Council for Interreligious Dialogue, and Maria Voce, president of the Focolare Movement and the only woman to lead a major lay movement within the Catholic Church, received honorary doctor of laws degrees during an academic convocation Monday at Notre Dame’s new center in Rome, located just a block from the Colosseum.

“We are extraordinarily proud to add to the number of our alumni such distinguished figures as Cardinal Tauran and Maria Voce,” said Rev. John I. Jenkins, C.S.C., the University’s president.

Cardinal Tauran and Father Jenkins addressed the convocation on the intersection of faith and reason and how that nexus imparts a special responsibility on Catholic universities to contribute to cross-cultural dialogue.

“University academics and students are on the front line of interreligious dialogue,” Cardinal Tauran said. “All over the world, good Christians try to listen to other persons in order to know, understand and share our human condition with other religious persons or groups.

“The specific contribution of the university to interreligious dialogue is realized through research, taking into consideration the statistical, historical, social, cultural and theological points of view. What is essential is the right attitude toward the truth: impartiality, objectivity and promotion of the culture of encounter.”

Father Jenkins’ remarks complemented Cardinal Tauran’s by examining the origin of universities in the Catholic culture of medieval Europe and the belief that “sustained cooperative inquiries by dedicated scholars would be fruitful.”

“Notre Dame continues in that proud tradition and strives to be a living institutional witness to the harmony of faith and reason,” Father Jenkins said.

Following the convocation, Voce gave an invocation and remarks at a celebratory lunch at Palazzo Brancaccio. She spoke about how a commitment to “a life of love based on the Gospel” can illuminate our understanding of the law and human interaction.

“In mutual love, we have discovered the fundamental law of collaboration that serves as a cohesive and binding force for society,” Voce said. “And it is in the commitment to place at the basis of our lives this one commandment that we discover the joy of being active participants in building more fraternal and more just humanity.”

A native of Bordeaux, France, Cardinal Tauran was ordained to the priesthood in 1969. He worked as a priest of the Archdiocese of Bordeaux before entering the Vatican’s diplomatic service in 1975 and serving in the nunciatures, or Vatican embassies, of the Dominican Republic and Lebanon. In 1983 he was appointed to the Council for the Public Affairs of the Church, served in Vatican missions to Haiti, Beirut and Damascus, and was a Vatican delegate to several international conferences on security, disarmament and cultural relations. He was elevated to cardinal by Pope John Paul II in 2003.

A native of southern Italy, Voce in 2008 became the first successor as president of the Focolare Movement since it was founded in 1943 by Chiara Lubich in northern Italy. It has become an international organization that promotes the ideals of unity and universal brotherhood, drawing about 140,000 core members and 2 million affiliates in 182 nations. Though primarily Roman Catholic, Focolare has strong links to other Christian denominations and other religions. The movement takes its name from the Italian word for “hearth” and considers its outreach the “The Work of Mary.”

A columnist for the official Vatican newspaper, L’Osservatore Romano, recently called Voce “the most eminent woman in the Catholic world.” She has been part of Focolare since 1963, living in the movement’s centers in Italy and Turkey and working in the founder’s personal secretariat. She led the updating of Focolare’s general statutes between 2002 and 2007 and is a consultor for the Pontifical Councils for the Laity and for Promoting the New Evangelization.

As a legal expert, she is a member of the Abba School, a Focolare center for interdisciplinary studies, and co-leader of Communion and Law, a network of academics and professionals involved in law. The first woman to practice law in Rome’s modern judicial system, Voce received a degree in civil law from Sapienza University of Rome, as well as degrees in theology and canon law.

During their week in Rome, Father Jenkins and other University officials are meeting with Vatican leaders in papal congregational offices and pontifical councils related to Notre Dame’s mission as a leader in Catholic higher education. The Board of Trustees also will conduct its regular business meetings about nine months after the election in March of Pope Francis and a month after Time magazine named him its Person of the Year. Coincidentally, the board’s last meeting in Rome was in 2006, also taking place nine months after the election of a new pontiff, Pope Benedict XVI.

The academic convocation occurred in the Notre Dame Rome Center at Via Ostilia 15, a recently renovated 32,000-square-foot building located in the San Giovanni neighborhood. The facility serves as the home to study abroad programs for the School of Architecture and the College of Arts and Letters. This Global Gateway will serve as the focal point for the University’s academic and cultural endeavors in Rome and, in conjunction with Notre Dame’s Global Gateways in London and Dublin, throughout Europe.