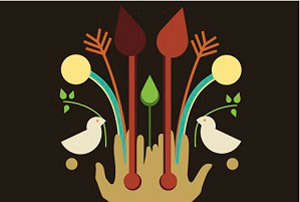 All members of the University of Notre Dame community are invited to celebrate the Feast of St. Francis of Assisi, patron saint of the environment, on Friday (Oct. 4). A special Mass will be celebrated by Rev. Terry Ehrman, C.S.C., at the Basilica of the Sacred Heart at 5:15 p.m.

At 12:30 p.m. at the statue of Rev. Edward Sorin, C.S.C., on South Quad, there will be a short ceremony called the Blessing of the Bicycles. Students, faculty, staff, alumni and friends are welcome to bring their bikes and receive God’s blessing for safety and health in their biking. Friday’s dinner at North and South dining halls will feature a nature-themed dessert buffet in honor of the Feast Day, provided by ND Food Services.

At 8 p.m., Subhankar Banerjee will present a talk titled “Long Environmentalism” in Room 101 of DeBartolo Hall. Banerjee is an award-winning photographer, author, activist and scientist who has exhibited across the United States, Europe, Australia and Mexico. Banerjee’s books include “Arctic National Wildlife Refuge: Seasons of Life and Land” (2003) and “Arctic Voices: Resistance at the Tipping Point” (2012). The talk is sponsored by the Society for Literature, Science and the Arts.

Notre Dame’s Feast of St. Francis program started in 2010 as a follow-up to Renewing the Campus, the University’s landmark 2009 conference on sustainability in Catholic higher education. The following year it became a model for Catholic campuses across the country when it was showcased in “Sustainability and Catholic Higher Education: A Toolkit for Mission Integration,” published by the Catholic Coalition on Climate Change. The coalition now develops an educational program each year that it shares with schools and parishes, with the result that tens of thousands of people celebrate St. Francis’ legacy and learn how they can be better stewards of the Earth.

“Notre Dame has really stepped up as an example to other Catholic schools about how to engage both the student body and the administration in making environmental sustainability a key priority for the campus,” said Dan Misleh, executive director of the Catholic Coalition on Climate Change. “Notre Dame recognizes that it is not only the school’s carbon footprint that matters, but also those who are impacted by its carbon footprint, especially the poor and vulnerable at home and abroad.”

This year’s Feast of St. Francis comes at a time of increasing concern for the health of the planet but also of renewed inspiration in the Catholic community. Pope Francis has clearly demonstrated that he intends to lead the Church in the footsteps of his namesake, who was known for his love for nature and the poor.

“I would like to ask all those who have positions of responsibility in economic, political and social life, and all men and women of goodwill,” said Francis in one of his first homilies as pope. “Let us be protectors of creation, protectors of God’s plan inscribed in nature, protectors of one another and of the environment.”