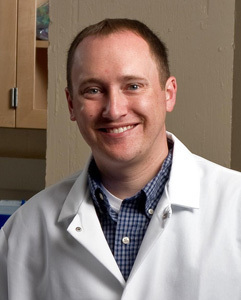 Zachary Schafer, the Coleman Assistant Professor of Cancer Biology in the Department of Biological Sciences and a member of the Harper Cancer Research Institute at the University of Notre Dame, has been named a 2011 V Scholar by one of the nation’s leading cancer research fundraising organizations, the V Foundation for Cancer Research. Seventeen physician/scientists will share the $3.4 million in funding given through the V Scholar program to bring science closer to finding a cure for cancer.

Through a very competitive process, Schafer was chosen from nominees at National Cancer Institute (NCI)-designated cancer centers and prominent universities involved in critical cancer research. He was nominated for this award by the Harper Cancer Research Institute and will use this award to study the regulation of tumor cell survival by carcinoma-associated fibroblasts.

As a V Scholar, Schafer has been awarded a two-year, $200,000 grant, and will have the freedom to decide how to best use the funds to further his research.

“Each year, the V Scholars are selected from a group of young cancer scientists that includes the most outstanding candidate from each of the National Cancer Institute designated cancer centers,” said Robert C. Bast Jr., vice president for translational research at M.D. Anderson Cancer Center and a member of the Scientific Advisory Board. “This year the V Scholars are even more exceptional than in the past.”

Schafer’s laboratory studies how cancer cells can survive outside their natural environments and how changes in cellular metabolism can promote survival or induce cell death. He focuses on how cancer cells disable anoikis, a cell death program that serves as a barrier to metastasis by killing cells that have left their normal home.

His preliminary work has demonstrated that carcinoma-associated fibroblasts, noncancerous cells present in the tumor microenvironment, are actively involved in blocking anoikis. Schafer’s laboratory will seek to identify and characterize the precise mechanisms that are involved in the prevention of anoikis by carcinoma-associated fibroblasts. He seeks to understand the basic biology underlying this process, so that novel therapeutics can be designed to target these mechanisms, inhibiting cancer metastasis.

“I am humbled and honored to be recognized and supported by an organization I have so much respect for,” Schafer said. “I vividly remember watching Jim Valvano give the speech announcing the creation of the V Foundation shortly before he died, and I remain inspired by his call to action for cancer research. I am tremendously grateful to the Department of Biological Sciences for the opportunity to build my research program amongst a multitude of passionate and talented colleagues and for the outstanding mentorship I have received from senior faculty that made this award possible.”

The V Foundation, a charitable organization dedicated to saving lives by helping to find a cure for cancer, was founded in 1993 by ESPN and Jim Valvano, a former NCAA championship winning basketball coach and cancer patient.

As a cancer patient, Valvano recognized the need to invest in young physician/scientists to help establish their careers, as someone had invested in him early in his career. The Foundation developed the V Scholar program to help early-career cancer investigators develop into promising future research talents, so that the scientific process from laboratory research to the patient bedside could be shortened.


Schafer earned his undergraduate degree in biology at Notre Dame in 2001 and his doctorate at Duke University in 2006. He was a postdoctoral fellow at Harvard Medical School until he joined the Notre Dame faculty in 2009.