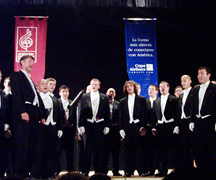 Nicaragua, Nicaragüitais probably not something you would expect to hear sung by the Notre Dame Glee Club.It was, however, executed perfectly by the group after members memorized it in a matter of hours during the bumpy bus ride throughHondurasto a concert inManagua,Nicaraguaearlier this summer.

The Glee Club toured Latin America from May 16 through June 5, visiting with international alumni groups that were thrilled to have them there for the first time, and performing in Mexico, Guatemala, Honduras, Nicaragua and Panama.As it typically does, the group adapted its repertoire to better engage each audience and was rewarded with thunderous applause, according to Daniel Stowe, the clubs director.

We tried to program a folk song arrangement from each of the countries on our itinerary,he said.I received the Nicaraguan song en route by fax and finished a mens choir arrangement the day before our concert.We always try to include some North American folk material and spirituals as well, so that our audience can have a taste of our own traditions.

Before the first verse ofNicaragua Nicaragüitahad been sung, the audience roared its appreciation, and again at the end.A local choir director praised the Glee Club for a better performance than his group has achieved after years perfecting the song.

Such meaningful programs and unprecedented hospitality from the audiences and Notre Dame alumni throughoutCentral Americamade the trip unforgettable for the young singers.

It was an experience I will cherish forever,said John Kearney, a senior fromWorcester,Mass.The opportunities we were given and the hospitality that was shown to us would be hard to rival on any other trip in any other part of the world.From the beaches ofMexico, to the families that met us inGuatemala, the culture ofHonduras, the students who introduced us to the life ofNicaragua, and to the sights we saw inPanama, we were a part of something that few people could experience in a lifetime.

Greeted by a live marimba band inGuatemala Cityand presented with gifts of Guatemalan woven belts, Glee Club members, warmed by their first taste of the local culture, were well inspired for their concert at the Universidad Francisco Marroquín, where proceeds benefited a university scholarship fund.Before leaving the country, the group enjoyed a tour of anAntiguacoffee farm, owned by alumnus Philip Wilson.

InHonduras, the Glee Club toured a tropical bird aviary, rode four-wheelers to the Tela beach home of alumnus Miguel Facussé, who, for the occasion, installed a swimming pool, cabana and beach volleyball area, and kayaked along the rain forest river bordering their hosts property on the countrys northern coast.For lunch they feasted on tropical Honduran cuisine.

Proceeds from the concert inTegucigalpabenefited Asociacin Koinonia, a local service organization.After the concert the Honduran chief of staff arranged for a private tour of the Casa Presidencial.

Notre Dame alumnus Rogelio Miró, who provided a catered luncheon for alumni and Glee Club members at his beach resort inPanama, is among many in the Notre Dame family who made a financial contribution to off-set the studentstravel expenses.

Everyone was particularly impressed with the number of solo voices in the choir, the number of Spanish-speaking members, and the exceptional original arrangement made with the traditional Panamanian classical song Taboga,Miró said.The whole evening was super.

Arguably the largest ever coordinated between a Notre Dame group and international alumni, the tour was funded in part by the Latin American alumni, who also coordinated the concerts, publicity and ticket giveaways and planned the special welcomes, meals, receptions, tours and gifts for the group.

The Glee Club tours internationally every two years and visited Puerto Rico in 1991, the only other time members have toured inLatin America.

It wont be the last, at least not forKearney, who was so inspired he plans to return after he graduates.

I hope I have a chance to go back down to really experience the culture and do some service work,he said.To return the warmth that we received from the people of these countries is something that I, and other members of the group, feel inclined to do.Thanks to their support, as well as that of the Alumni Association, we were able to experience part of the world that we otherwise may never have seen.

Recognized as one of the finest all male collegiate choral groups in the country, theUniversityofNotre Dame Glee Clubhas a rich history of singing and brotherhood spanning the last 89 years.More than 2,000 young men have sung with the group over the years, combining the rich traditions of Notre Dame with the highest standards of artistic excellence.

Since 1915, these musical ambassadors of Notre Dame have enjoyed an exciting fraternal organization, combined with an intensive study of vocal technique and musical styles.The group has toured from coast to coast and around the world, performing over 100 concerts per year.

Although, according to Stowe, none as rewarding the most recent.

In terms of hospitality and consistently large audiences,he said,Latin Americawas the best trip weve ever had.