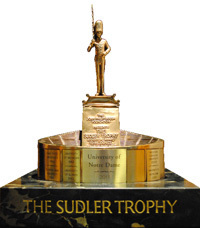 The University of Notre Dame Band will be presented with the Sudler Trophy at halftime of the Notre Dame vs. Air Force game on Oct. 8 (Saturday) in Notre Dame Stadium.

The trophy consists of a marble base with a bronze drum major astride a football stadium. The drum major stands 22.5 inches tall, the same measurement as one standard marching step. The trophy is produced by Dieges and Clust, who also make the Heisman Trophy. The Sudler Trophy will be displayed in the Ricci Band Rehearsal Hall at the University of Notre Dame.

Dating back to 1845, the Notre Dame Band is the oldest college band in continuous existence in the United States and was honored as such by being declared a “Landmark of American Music” by the National Music Council and the Indiana Music Educators Association during the 1976 United States Bicentennial.

In addition to a rich history of performing at concerts, campus celebrations and religious ceremonies, the Band of the Fighting Irish has a long tradition of providing music and pageantry for Notre Dame football games and athletic events. The Band was on hand for Notre Dame’s first football game in 1887 and has performed at every home game since then.