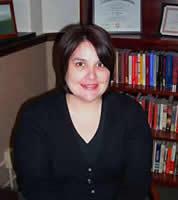 Laurie Arnold (Colville), assistant director of the University of Notre Dame’s Institute for Scholarship in the Liberal Arts, has been named director of Native American initiatives. Arnold’s appointment comes in response to growing interest in Native American studies and topics at Notre Dame.

An enrolled member of the Colville Confederated Tribes, Arnold previously served as associate director of the D’Arcy McNickle Center for American Indian and Indigenous Studies at the Newberry Library in Chicago. She earned her doctoral degree from Arizona State University.

“Like many other faculty and students, I would love to see the strong development of Native American studies here at Notre Dame,” says Erika Doss, chair of the Department of American Studies. “Laurie’s leadership in this area has been incredibly valuable – she has both the cultural background and the intellectual training to make Native American events and programming on campus a success.”

Arnold taught a native histories course in the Department of American Studies this spring and organized guest speakers that included film maker Sterlin Harjo, whose film “Four Sheets to the Wind” attracted some 150 people to the screening on campus. She also hosted scholars Robert Warrior and Scott Stevens and is planning a Native American film series.

“Notre Dame has a long history with Native Americans, starting with the Potawatomi Indians who greeted Father Sorin upon his arrival,” Arnold says. “Native American students, like other students, need to find cultural connections in order to be comfortable at a university. Notre Dame is well-situated, both in terms of region and mission, to provide that cultural home.”