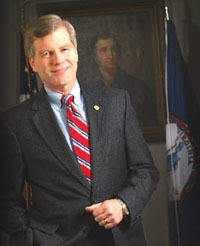 McDonnell, who was graduated from the University in 1976 after majoring in business management, defeated Virginia state Sen. Creigh Deeds, 59 percent to 41 percent.

A native of Philadelphia, McDonnell served 21 years in the U.S. Army and reserves after his graduation. While serving in Germany he earned a master of science degree in business administration from Boston University and later earned a degree in law and a master’s degree in public policy from Regent University in Virginia Beach.

McDonnell and his wife, Maureen, have five children, the oldest of whom, Jeanine, is an Iraq war veteran.