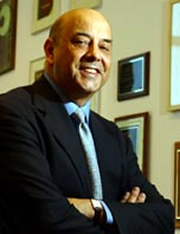 Julio M. Ottino, dean of the Robert R. McCormick School of Engineering and Applied Sciences at Northwestern University, will present the 2006 Reilly Lectures at 3:30 p.m. March 21 and 22 (Tuesday and Wednesday) in Room 136 of DeBartolo Hall at the University of Notre Dame.

Sponsored by Notre Dame’s Department of Chemical and Biomolecular Engineering, the lectures are free and open to the public.

Ottino will deliver a talk on March 21 titledA Window into Complex Systems – Examples, Challenges and Opportunitiesin which he will discuss complex systems and the inroads being made in anthropology, urban studies, political science and finance.He also will presentGranular Matter: Mixing, Segregation, Coarsening and the Interplay between Discrete and Continuum Viewpointson March 22.

Ottino, a native ofArgentina, has served in his current position since 2005.He is the author of more than 150 research publications, and his work has appeared in cover articles of many scientific journals, including Nature, Science and Scientific American.His 1989 bookKinematics of Mixing: Stretching, Chaos, and Transporthas been reprinted several times and is considered a classic in the field.

The Reilly Lectureship at Notre Dame was established in 1958 and is thought to be theUnited Statesoldest continuing lecture series in chemical engineering.The lectureship is supported by the Peter C. Reilly Fund, named in honor of the former University trustee and honorary degree recipient.