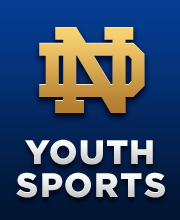 Laboratory tests conducted by the Indiana State Department of Health have confirmed that Norovirus was the cause of a gastrointestinal outbreak that affected 106 participants in sports camps this week at the University of Notre Dame, according to Dr. Thomas A. Felger, St. Joseph County health officer.

Most of those who became ill were middle and high school athletes participating in the football, hockey, women’s basketball, women’s lacrosse and women’s tennis camps. Twenty-nine campers were hospitalized; all have been released.

Norovirus is a very contagious virus, and is the most common “stomach bug” in the United States. It can be spread in the same manner in which flu viruses are spread. The specific reason for the outbreak at Notre Dame is unknown. Food poisoning, which is bacterial rather than viral, was ruled out as a cause.

Notre Dame is working with the St. Joseph County Health Department and the Indiana State Department of Health to gather and disseminate information related to the outbreak.

Additional information about Norovirus can be found on the Centers for Disease Control and Prevention website.