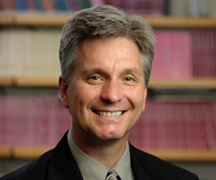 The Jimmy Stewart classicIts a Wonderful Life,for example, offers an excellent primer on the early chapters of the American mortgage industry, says the professor of economics and specialist in the political economics of central banking.

Regardless of his insight and insider perspectives, Wallers fate is similar to the one many Americans are facing with the bailout of the banking industry, beginning with a sense of astonishment and confusion.

I couldnt believe half of what was going on in the last month,Waller told a Saturday Scholars audience before a recent home football game.

His retirement account has lost value:I looked at it the other day. I wanted to throw up. I cant believe how much it has lost.

His mother is scared: Like many retirees, she wants to know how to protect her life savings, which are losing value.I tell her: Dont do anything.If the money is not immediately needed for day-to-day living expenses, dont change your investment plans.It will come back.

He will not be rewarded for living within his means.Im going to be paying the taxes for people in California who bought a million dollar house they couldnt afford. Some people behaved very well for the last 10 years, some didnt; and at the end of the day, those who behaved well will pay for those who did not.

Reminiscent of another Jimmy Stewart movie, Wallers life soon will assume some of the plot points ofMr. Smith Goes to Washington.In July, he will become senior vice president and director of research for the Federal Reserve – albeit in the St. Louis, not Washington D.C., offices. In the end of that film, Mr. Smith triumphs. No such happy ending can be predicted for the period during which Mr. Waller goes to St. Louis.

The success of the bailout plan, although based on techniques that have worked before, is not at all assured.

Were going to have to wait months and years to see if this works,Waller predicts.

With the so-calledlittle guy,or even professional economists, absorbing the cost of the problem, theres a temptation to see the $700 billion bailout plan as a bailout of Wall Street.

Not in Wallers view.

This plan was not intended to bail out the big banks in New York. Its meant to unfreeze the financial market,he explains.

U.S. Treasury Secretary Henry Paulson approached Congress for action two days after it became clear that the credit market had frozen, that even banks that had money to lend had stopped making loans, or had made them almost unaffordable to obtain.

According to Waller, heres where the Jimmy Stewarts and Donna Reeds get hurtthe type of people who live and work onMain Street.(By the way, despite the buzz on mortgage foreclosures, more than 97 percent of American mortgage holders still are making their payments.)

Businesses completely unrelated to the housing industry are getting caught in the credit freeze. They are unable to borrow money to pay their employees or their suppliers. With no money to make payroll, layoffs are likely. With no money to buy supplies, production will cease and thus will sales and income. The freeze wasnt just felt in the financial industry; it was felt by groups unrelated to Wall Street such as utility companies, transportation groups and agriculture implement manufacturers.

The $700 billion bailout allows the treasury to buy bad assets and hold them,Waller said.It is hoped that this will restore confidence and trust in credit.

One optimistic prediction is that the Treasury will need to apply only the first few billion before the credit markets begin functioning.

There are still problems out there,he explains.Will hedge funds soon collapse? Will more bailouts be needed?

In this story, its not just the ending thats missing. Its the middle.

Note: A video stream of Wallers Saturday Scholars presentation is available on the Web at http://www.youtube.com/watch?v=6X4q2qJ1cUM .