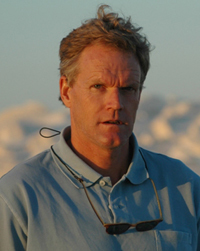 The New York Times U.N. Bureau Chief Neil MacFarquhar, who spent his boyhood in Libya and has covered the Middle East for nearly 20 years, will speak Nov. 3 (Tuesday) at 4:15 p.m. in the auditorium of the University of Notre Dame’s Hesburgh Center for International Studies. This event is free and open to the public.

MacFarquhar believes that the endless stream of headlines about suicide bombers and violence in the Middle East has severely limited perceptions of the Arab world and Iran. He will draw from his new book, “The Media Relations Department of Hizbollah Wishes You a Happy Birthday: Unexpected Encounters in the Changing Middle East,” to challenge simplistic assumptions and offer new perspective on a region struggling to adjust to the pressures of modernity.

MacFarquhar grew up in the 1960s in Marsa Brega, a fenced-off expatriate oil compound in Libya. After studying international relations at Stanford University, he returned to the Middle East, became fluent in Arabic, and covered the region for The Associated Press and then as The New York Times bureau chief in Cairo. He has been The Times United Nations bureau chief since 2008.

Thanassis Cambanis, professor of journalism at Princeton, writes that MacFarquhar’s book is a “funny (yet penetrating) account about real Arabs — and a few Persians — struggling against long odds to bring their societies into the modern age….The characters he introduces fight at great personal risk for civil liberties, political transparency, freedom of worship, even for genuine political pluralism. They give lie to the misleading claim that democracy is somehow incompatible with Arab culture.”

The talk is sponsored by Notre Dame’s Kroc Institute for International Peace Studies. A reception and book signing will follow in the Great Hall of the Hesburgh Center.