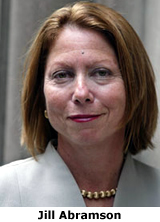 Jill Abramson, managing editor of The New York Times, is visiting the University of Notre Dame this week as the Keifer Visitor in Journalism.

Abramson, who has held her current position since 2003, is speaking in classes as well as meeting with students and faculty in the John W. Gallivan Program in Journalism, Ethics&Democracy during her time on campus. Her visit is supported by the Marguerite and Lou Keifer Endowment for Excellence in Journalism.

A graduate of Harvard, Abramson joined The Times in 1997 and served as the papersWashingtonbureau chief for three years. The previous decade she was an investigative reporter and editor at The Wall Street Journal. Shes the co-author of two booksStrange Justice: The Selling of Clarence ThomasandWhere Are They Now.

The Keifer Endowment, which was created in 1999, has brought such notable journalists as Eugene Patterson, Hugh Mulligan, Carol Marin and Julia Keller to Notre Dame.