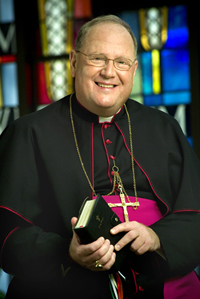 Ann Astell, professor of theology, and Gerald McKenny, Walter Professor of Theology at Notre Dame, will give responses to Archbishop Dolan’s lecture, which is free and open to the public.

Archbishop Dolan, who was named New York’s archbishop in 2009, was elected president of the United States Conference of Catholic Bishops last year.

His lecture is the first in a series to be hosted by the Project on Human Dignity, a program of Notre Dame’s Institute for Church Life (ICL), which also will organize symposia, classes, retreats and academic events intended to define and defend the concept of human dignity.

According to John C. Cavadini, McGrath-Cavadini Director of the ICL, the new program’s multiple objectives include a defense of the right to life from conception to natural death; a defense of all human rights mentioned in the teachings of Pope John Paul II through a persuasive clarification of the idea of human dignity from which those teachings emerge; a demonstration of the mutual indispensability of the concept of human dignity both to advocates of the right to life and advocates of other Catholic social teachings; a clarification of the role of the Catholic Church as the “sign and safeguard” of human dignity and education in support of that role; and making the concept of human dignity a recurrent and compelling topic of campus conversation and concern.

“The concept of human dignity, of the unique value of the human person, is an essential foundation of Catholic teaching on human rights, including the right to life,” Cavadini said. “And yet, especially in the last two decades, the very idea of human dignity has come under assault, so much so that it has been declared a ‘meaningless’ concept by secular theorists, and even some ardent supporters of the idea have conceded that there is no common understanding of what ‘human dignity’ means. We want to take up the challenge of making the idea of human dignity accessible to persons of all faiths or no faith, and to exhort our students, faculty and all others in the Notre Dame community to recognize their own human dignity and respect that of others.”

More information on the new program is available here.