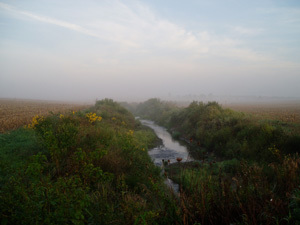 A new study by University of Notre Dame ecologist Jennifer Tank and colleagues reveals that streams throughout the Midwest are receiving transgenic materials from corn crop byproducts, even six months after harvest.

Transgenic maize (corn) has been genetically engineered to produce its own insecticide, a delta endotoxin from the bacterium Bacillus thuringiensis (Bt). Bt endotoxins deter crop pests, such as the European corn borer.

In a 2007 paper in the Proceedings of the National Academy of Science (PNAS), Tank and a group of researchers demonstrated that transgenic materials from corn (pollen, leaves, cobs) do, in fact, enter streams in the agricultural Midwest and can be subsequently transported to downstream water bodies. In a new paper published in today’s edition of PNAS, Tank and colleagues investigated the fate and persistence of the material and its associated Cry1Ab insecticidal protein using a synoptic field survey of 217 stream sites in northwestern Indiana six months after crop harvest.

“We found that corn crop byproducts were common in agricultural streams and that 86 percent of sites contained corn leaves, cobs, husks and/or stalks in the active stream channel,” Tank said. “In addition, using a sensitive laboratory test that specifically measures the amount of Cry1Ab protein from Bt corn, we detected Cry1Ab in corn collected from 13 percent of the stream sites. We also detected Cry1Ab dissolved in stream water samples at 23 percent of the sites, even six month after crop harvest.”

Tank points out that a majority of streams in the Midwestern corn belt are located in close proximity of corn fields.

“Our GIS analyses found that 91 percent of the more than 200,000 kilometers of streams and rivers in Indiana, Iowa and Illinois are located within 500 meters of a corn field, suggesting that corn crop byproducts and any associated insecticidal proteins may enter streams across the corn belt states,” she said.

Previous research has overlooked the potential for crop byproducts from transgenic corn to enter and be dispersed by headwater streams.

“Our study demonstrates the persistence and dispersal of crop byproducts and associated transgenic material in streams throughout a corn belt landscape even long after crop harvest,” Tank concluded.

This research emphasizes that there is a tight link between streams and adjacent agricultural fields and dispersal of crop byproducts could affect natural ecosystems beyond field boundaries.