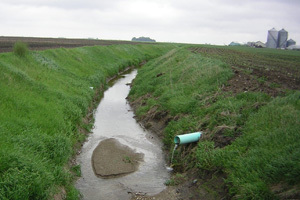 Jake Beaulieu, a postdoctoral researcher at the Environmental Protection Agency in Cincinnati, Ohio, who earned his doctorate at the University of Notre Dame, and Jennifer Tank, Galla Professor of Biological Sciences at the University, are lead authors of new paper demonstrating that streams and rivers receiving nitrogen inputs from urban and agricultural land uses are a significant source of nitrous oxide to the atmosphere.

Nitrous oxide is a potent greenhouse gas that contributes to climate change and the loss of the protective ozone layer. Nitrogen loading to river networks from urban and agricultural activities is a potentially important source of nitrous oxide emission to the atmosphere. It occurs through a microbial process called denitrification, which converts dissolved nitrate-nitrogen to nitrous oxide and dinitorgen gases.

In a paper appearing this week in the Proceedings of the National Academy of Sciences (PNAS), Beaulieu and Tank describe how they measured nitrous oxide production rates from denitrification in 72 streams draining multiple land-use types across the United States.

They found that the amount of nitrous oxide produced in streams is related to human activities that release nitrogen into the environment, such as fertilizer use and sewage discharges.

“Runoff from agricultural and urban watersheds has increased the availability of nitrogen in streams and rivers, greatly increasing nitrous oxide production rates,” Beaulieu said. “This research shows that river networks play an important role in how human nitrogen use affects climate change and ozone loss.”

The new study reports that streams and river networks are the source of at least 10 percent of human-caused nitrous oxide emission to the atmosphere worldwide, which is three times the amount estimated by an earlier report from the Intergovernmental Panel on Climate Change (IPCC).

Beaulieu and Tank suggest that reductions in nitrous oxide emissions from stream and river networks can be achieved through changes in urban and agricultural land use patterns, such as reduced agricultural fertilizer application.

The study appearing in PNAS was funded by the National Science Foundation.