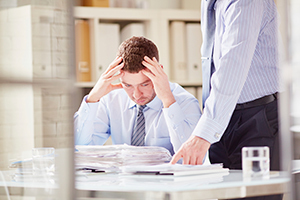 As anyone who has experienced it will attest, dealing with a boss who acts abusively can be a very difficult and confusing experience. However, the process by which such behavior emerges has received little attention from researchers. A new study by researchers Charlice Hurst, Ken Kelley and Timothy Judge from the Department of Management at the University of Notre Dame’s Mendoza College of Business and Lauren Simon of Portland State University is the first to examine bullying behavior by bosses in terms of supervisor/employee relationship over time.

According to the Workplace Bullying Institute, 27 percent of employees in the U.S. have experienced workplace bullying before, most often from supervisors. There are numerous possible reasons for bullying behavior by bosses, including the boss’s personality and home life, their feelings about how fairly they are being treated by the organization, and the performance and behavior of their employees.

“We wanted to see how employees’ behaviors might influence their likelihood of being mistreated in the future,” Hurst said. “When someone mistreats us, we can have natural urges to either want to fight back, or to avoid the individual. For example, a supervisor might berate an employee, and the employee may become angry and seek revenge, for instance, by being rude to his/her supervisor, in an attempt to send a signal to ‘not mess with me.’ Or, out of fear, an employee may also do whatever he or she can to stay out of harm’s way and avoid their supervisor.”

To better understand employee and supervisor behavior, the researchers surveyed 244 employees in a variety of organizations monthly over a six-month period.

“Interestingly, our findings show that both retaliation and withdrawal, as responses to abusive supervision, are actually associated with increases in subsequent levels of mistreatment,” Hurst said. “Thus, although certainly understandable and common reactions, they may not be the most useful in reducing mistreatment in the future. We examined whether a different class of behaviors, such as engaging in activities that help the supervisor, might diminish further abuse. Unfortunately, helping the supervisor had no effect."

So, what should employees do?

“This is a question that researchers need to work to answer more effectively,” Hurst said. “Ideally, organizations will have robust systems for detecting and responding to situations in which a manager is being abusive. But this is often not the case. Prior research suggests several approaches that individual employees might try when it is not practical to exit an abusive supervisory relationship right away. Employees of abusive supervisors experience less emotional distress when they are vocal with their supervisor about their concerns about how they are being treated, building positive relationships with others in the workplace, and seeking ways to reappraise the situation as beneficial in some way such as promoting personal growth through adversity.”

The study will appear in the Journal of Applied Psychology.