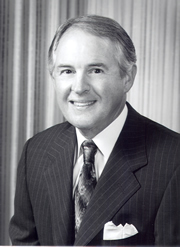 An award for student leadership has been established at the University of Notre Dame in honor of Ray Siegfried, a Trustee, alumnus and benefactor of the University who died last year after a long and courageous struggle with amyotrophic lateral sclerosis (Lou Gehrigs Disease).

The Ray Siegfried Award for Leadership Excellence, jointly sponsored by Notre Dames Office of Student Affairs and the Student Affairs Committee of the Board of Trustees, will be presented annually to a senior who exemplifies the qualities for which Siegfried was known and admired in the University community, including leadership, generosity, devotion to the Catholic faith and delight in athletics.Nominations are being solicited from Notre Dames residence hall rectors, student affairs department directors and other campus officials.

Siegfried, a 1965 Notre Dame alumnus, was chairman of the board of the NORDAM Group, an international aerospace manufacturer, when he died Oct. 6 inTulsa,Okla.Despite the ordeal of his illness, he had maintained an active schedule which included regular visits to the Notre Dame campus.Among the gifts he and his family have given the University are theSiegfriedBuildingin the Mendoza College of Business; Siegfried Hall, a mens residence; and the Ray and Milann Siegfried Chair in Entrepreneurial Studies, which is now held by Carolyn Y. Woo, Gillen Dean of the Mendoza College of Business.He also was the enthusiastic host of an annual dinner for the men of Siegfried Hall, whose success in intramural sports he greatly enjoyed. He received an honorary doctor of laws degree from Notre Dame in 1995.