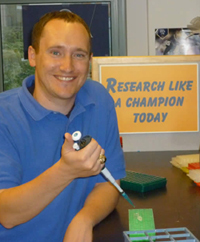 A paper appearing in this week’s edition of the journal Nature by a team of researchers that includes University of Notre Dame biologist Zachary T. Schafer has important new implications for understanding the metabolism of tumors.

Schafer, an assistant professor of biological sciences and Coleman Junior Chair of Cancer Biology, points out that in the early stages of tumor formation some cells become detached from their normal cellular matrix. These “homeless” cells tend to develop certain defects that stop them from becoming cancerous. In a process known as apoptosis, these precancerous cells essentially kill themselves, allowing them to be destroyed by immune system cells.

The prevailing wisdom among researchers has been that apoptosis was the only way that cells could die.

In studies conducted prior to the research described in the Nature paper, it was found that even when apoptosis was inhibited in detached, precancerous cells, they still eventually died. Intrigued by these results, a team of researchers led by Joan S. Brugge, Louise Foote Pfieffer Professor of Cell Biology at Harvard Medical School, and Schafer decided to take a closer look.

They report in this week’s Nature paper that they found that even when apoptosis was inhibited in detached cells endowed with a cancer-causing gene, they still were incapable of absorbing glucose, their primary energy source. Additionally, the cells displayed signs of oxidative stress, which is a harmful accumulation of oxygen-derived molecules called reactive oxygen species (ROS). The research also revealed decreased ATP production, a key factor in energy transport in the cells.

Schafer notes that this combination of loss of glucose transport, decreased ATP production and heightened oxidative stress reveal a manner of cell death that hadn’t been previously demonstrated to play a role in this context.

In the next phase of the study, Schafer engineered the cells to express a high level of HER2, a gene known to be hyperactive in many breast cancer tumors. He also treated the cells with antioxidants to relieve oxidative stress.

Both approaches helped the cells survive. The HER2-treated cells regained glucose transport, avoided oxidative stress and recovered ATP levels.
Most surprisingly, the antioxidants restored metabolic activity in the cells by allowing fatty acids to be effectively used instead of glucose as an energy source, providing them with a chance to survive.

“Our results raise the possibility that antioxidant activity might allow early stage tumor cells to survive where they would otherwise die from these metabolic defects,” Schafer said.

He also cautions that while the antioxidant findings were surprising, their research was done solely in cell cultures and more research needs to be done before there are clear implications for individuals and their diets.

The paper does, however, offer important new clues about the metabolism of tumor cells and important information that may lead to drugs that can developed to target them.