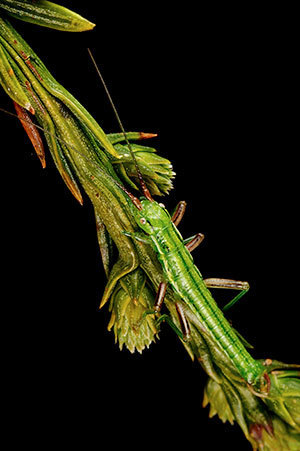 Jeffrey L. Feder, a professor of biological sciences at the University of Notre Dame, is a co-author of a paper featured Thursday (May 15) on the cover of the May 16 issue of the prestigious journal Science.

The paper describes the genomic basis for parallel evolution in the walking stick insect, Timema cristinae. Parallel evolution occurs when similar traits evolve independently in different related populations due to natural selection. There are many examples documenting parallel changes in the physical appearance and physiological characteristics of organisms when they independently experience the same environmental conditions in nature. What was not known until now was the degree to which the same or different sets of genes underlie these parallel “phenotypic” changes.

To determine this, Feder and colleagues transplanted different “ecotypes” of Timema specialized to feed on two different species of plants between the plants at a field site in southern California. Through Next Generation DNA sequencing of the offspring of surviving individuals, they measured the degree to which genes across the entire genome of the stick insects changed in response to the experimental manipulation. These results provided a base line to compare to patterns of genomic divergence observed in nature among a series of geographically separated pairs of Timema populations attacking the two plants.

The researchers reported finding that early stages of parallel speciation in the stick insect involved mostly non-parallel genetic divergence between the ecotypes. However, they also detected parallel genomic divergence for a subset of genes across populations involving mostly changes in protein coding regions of genes having specific molecular functions. Thus, some genetic changes appear to be shared while others differ when populations evolve similar adaptive traits in parallel. Feder and his fellow researchers stressed that their findings were enabled by the whole genome DNA sequencing approach and bioinformatics strategy used in the study.

Patrick Nosil at the University of Sheffield was senior author of the paper. The paper can be found at www.sciencemag.org/content/344/6185/738.full.