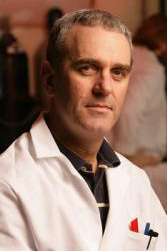 For quite some time, the “Holy Grail” in medical imaging has been the development of an effective method to image cell death as a means to intervene early in diseases and rapidly determine the effectiveness of treatments. A new paper by researchers at the University of Notre Dame and the Washington University School of Medicine describes important progress in using a synthetic probe to target dead and dying cells in mammary and prostate tumors in living animals.

The researchers also recently demonstrated that a fluorescent near-infrared probe referred to as PSS-794 can be used to image bacterial infections in mice, indicating that PSS-794 has a notable ability to selectively target anionic cells in living animals.

In the new paper, the researchers describe a significant expansion of the animal imaging capability of PSS-794 by showing that it can target the anionic dead and dying cells within tumors in rat and mouse models. The research is an important step toward the development of optical imaging probes that could determine, noninvasively, the amount and type of cell death in tumors. Such imaging techniques could help clinicians accurately determine the grade of tumors and the stage of cancers, as well as to measure the effectiveness of treatments.

The researchers also believe that analogous probes can be developed that would allow for deep tissue imaging of cancers in humans.

Smith points out that although the study focused on mammary and prostate tumors, imaging of cell death is broadly useful for treatment of numerous conditions, including cardiovascular disease, neurology, renal disease and even transplant rejection.

The research, described in the Journal of the American Chemical Society, was supported by the National Institutes of Health, Notre Dame’s Walther Cancer Center and the Notre Dame Integrated Imaging Facility.