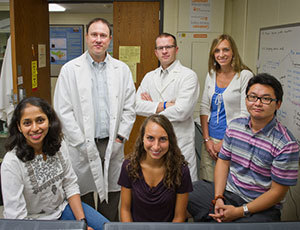 Part of the research team investigating the role of the Id2 gene in circadian-metabolic function. Clockwise from back to front: Giles Duffield, Mathew Leevy, Sarah Chapman, Peng Zhou, Alyssa Hummel and Deepa Mathew

A new study by a team of University of Notre Dame researchers, which appears in the Sept. 2 edition of the journal PLoS ONE, is a significant step in understanding the molecular genetic and physiological basis for a spectrum of metabolic diseases related to circadian function.

Obesity and diabetes have reached epidemic levels and are responsible for increased morbidity and mortality throughout the world. Furthermore, the incidence of metabolic disease is significantly elevated in shift-work personnel, revealing an important link between the circadian clock, the sleep-wake cycle, time-of-day feeding and metabolism.

Given that more than 16 percent of the U.S. and European workforce engage in shift work, an understanding of the development of elevated metabolic disorders in shift work is critical. Also, there are sex differences in the incidence of metabolic diseases, with obesity occurring more frequently in women and mortality rates for diabetes being higher in women. Understanding the molecular basis for these differences also is important.

The new study conducted by a team of researchers led by Giles Duffield, associate professor of biological sciences and a member of the Eck Institute for Global Health at Notre Dame, undertook a series of discrete behavioral and physiological experiments to determine the relationship between the circadian system and glucose metabolism. His group has been studying an important gene called “Inhibitor of DNA-binding 2” or Id2. The Id2 gene encodes a transcriptional repressor protein, whose normal job is to bind to specific transcription factor proteins and in turn reduce their operational activity. Removing Id2 from the biological system therefore impacts the switching off and on of other downstream genes.

The researchers examined glucose homeostasis and feeding/physical activity patterns in “knockout” mice that did not express the Id2 gene. Their analysis of the Id2 knockout mice provided behavioral and physiological evidence supporting a role for Id2 in the function of glucose homeostasis and circadian control of feeding and locomotor activity.

The researchers also established a circadian and metabolic phenotype that is defined by sex and age.

“We observed profound changes in their feeding behavior,” Duffield said. “This is interesting since the timing and 24-hour pattern of feeding in mice and in humans is thought to contribute to the development of obesity and metabolic disease. These knockout mice are lean, and are highly sensitive to the hormone insulin, and especially interesting is that the insulin sensitivity property is only found in the male animals. These sex-specific aspects of glucose metabolism add yet another layer of complexity on the genetic basis for developing metabolic disorders.” 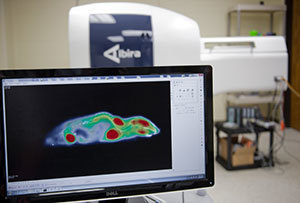 PET imaging of glucose uptake in the Id2 knockout mouse

Some of the research involved imaging of metabolic activity in living mice using positron emission tomography, where researchers could pinpoint very precisely where in fact the changes in physiology are occurring. The researchers discovered higher levels of glucose taken up by skeletal muscle and brown adipose tissue, but again only in the male knockout mice.

“Brown adipose tissue, once thought to be absent in adult humans but in fact recently shown to occur in a proportion of women and men, generates body heat from metabolizing nutrients, such as sugars and fats,” Duffield said. “Because it can divert nutrients to heat synthesis, rather than fat storage, and under the right conditions white adipose tissue can actually be converted to brown-type adipose tissue (also known as beige fat), it has been proposed that brown/beige fat could be a therapeutic target for combating obesity. In light of this, our recent data provide a very interesting finding.”

The levels of blood glucose are regulated by the hormone insulin. In Type 2 diabetes, it is the tissues of the body, such as skeletal muscle, that no longer respond correctly to the insulin signal. The research team demonstrated that the absence of Id2 results in the opposite effect, in which the Id2 knockout mouse has an enhanced sensitivity to the insulin signal. This subsequently increases uptake of glucose in the body’s tissues and depletes the blood of glucose, resulting in hypoglycemia.

“Since we observed differences in both overall quantities between the sexes, and in the relative proportions of different diacylglycerol sub-types in the male Id2 knockout mice, this highlights a possible mechanism through which Id2 could be changing the sensitivity of muscle to the insulin hormone signal,” Duffield said.

“The circadian clock and energy metabolism systems are tightly linked, one regulating the other,” Duffield said. “These and our previously published studies suggest an important role for the Id2 gene in shaping aspects of both of these systems. What our new study reveals is an important contribution for this gene in how the body controls blood glucose levels and metabolizes glucose, as well as how timing of feeding is regulated by the circadian clock. As feeding and fasting and the biological drive to eat are critical aspects of the daily metabolic cycle, these aspects are very much interconnected. What these data and some of our earlier work really mean for the human is that Id2 could serve as a potential target for both circadian rhythm disorders and aspects of metabolic dysfunction, such as found in obesity, diabetes and metabolic syndrome. And, of course, all of these are found elevated in shift work personnel.”

The work was funded by grants from the National Institute of General Medical Sciences, the American Heart Association and undergraduate student summer research fellowship support from the College of Science.