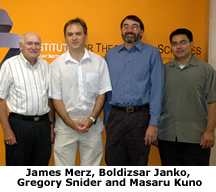 More than a century ago, at the dawn of modern quantum mechanics, the Nobel Prize-winning physicist Niels Bohr predicted so-calledquantum jumps.He predicted that these jumps would be due to electrons making transitions between discrete energy levels of individual atoms and molecules. Although controversial in Bohrs time, such quantum jumps were experimentally observed, and his prediction verified, in the 1980s. More recently, with the development of single molecule imaging techniques in the early 1990s, it has been possible to observe similar jumps in individual molecules.

Experimentally, these quantum jumps translate to discrete interruptions of the continuous emission from single molecules, revealing a phenomenon known as florescent intermittency orblinking.

However, while certain instances of blinking can be directly ascribed to Bohrs original quantum jumps, many more cases exist where the observed fluorescence intermittency does not follow his predictions. Specifically, in systems as diverse as fluorescent proteins, single-light harvesting complexes, single organic fluorophores, and, most recently, individual inorganic nanostructures, clear deviations from Bohrs predictions occur.

As a consequence, virtually all know fluorophores, including fluorescent quantum dots and molecules, exhibit unexplainable episodes of intermittentblinkingin their emission. The underlying quantum mechanical process responsible for this phenomenon is an enduring mystery in modern chemical physics.

Now, Jankó and his team of researchers hope to unlock the mysteries of these fluorescent molecules or flourophores. Their results could lead to powerful imaging probes that will enable future researchers to better track disease-related molecules within cells.

Fluorescent molecules could be of fundamental importance in imaging biological systems and monitoring dynamic processes in vivo ,Jankó said.One of the most attractive type of flourophores today are semiconductor nanocrystal quantum dots (NQD). Their small size, brightness, photostability and highly tunable fluorescent color make them vastly superior to organic dyes.

The blinking phenomenon, however, presents daunting difficulty is using these dots, especially for such applications as single-molecule biological imaging, where a single NQD is used as a fluorescent label.

The NQD is fluorescent for some time, a so-called on-time,and then becomes optically inactive, experiencing an off-time,whereupon it turns on again,Jankó said.

If the blinking process could be controlled, quantum dots could, for example, provide better, more stable, multi-color imaging of cancer cells or provide researchers with real-time images of a viral infection, such HIV, within a cell.

It is very important to elucidate the origin of this phenomenon and to identify ways to control the blinking process,Jankó said.

The team already has taken a strong first step toward understanding the phenomenon through research by group member Masaru Kuno, an assistant professor of chemistry and biochemistry at Notre Dame. Kuno has discovered that the on- and off-time intervals of intermittent nanocrystal quantum dots follow a universal power law distribution. This discovery has provided Notre Dame researchers and others with the first hints for developing a deeper insight into the physical mechanism behind the vast range of on- and off-times in the intermittency.

And Rusty Landford of the Bioimaging Beckman Institute at the California Institute of Technology will collaborate with the Notre Dame researchers on how to optimize the quantum dots for medical imaging.

The flourophore research effort also will feature a strong outreach component under which Notre Dame undergraduates and high school students will have the unique experience of witnessing first-hand single molecule imaging via a low-cost, single molecule-sensitive optical microscope we have developed from off-the-shelf components,Jankó said.

The overall goal of the NIRT program is to encourage synergistic science and engineering research in emerging areas of nanoscale science and technology. The award process is extremely competitive with only 4 percent of submitted proposals receiving subsequent NSF funding.

Jankó previously received a $1.8-million NIRT grant in 2002 to support research on the development and creation of man-made materials aimed at performing extremely fast functions in future generation computers.