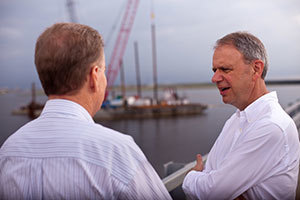 Less may mean more when it comes to the levee systems designed to protect New Orleans from hurricanes.

That’s the conclusion of a new study by a team of University of Notre Dame researchers led by Joannes Westerink, chair of the department of civil and environmental engineering and earth sciences and co-developer of the authoritative computer model for storm surge used by the U.S. Army Corps of Engineers, the Federal Emergency Management Agency (FEMA) and the state of Louisiana to determine water levels due to hurricane surge and to design levee heights and alignments.

The lower Mississippi River south of New Orleans protrudes into the Gulf of Mexico, and man-made levees line the west bank of the river for 55 kilometers of what is known as the Lower Plaquemines section. There are no levees on the east side of this stretch of the river. Westerink points out that, historically, sustained easterly winds from hurricanes have directed storm surge across Breton Sound into the Mississippi River and against its west bank levees.

“This study clearly shows that the man-built west bank levees on the lower Mississippi River enhance the capture of storm surge by the river,” Westerink said. “The surges are generated by the prevalent easterly winds that are common for regional hurricanes, but they spill into the river. These surges then propagate upriver, endangering New Orleans from the river side.”

As an alternative, the study shows that the lowering of man-made levees along the Lower Plaquemines river section to their natural state, to allow storm surge to partially pass across the Mississippi River, will decrease storm surge upriver toward New Orleans.

The study also shows that the size of surges captured by the river actually decreases with a high-stage river.

The researchers are aware that eliminating the man-made levees on the west bank might potentially endanger the few sparsely populated areas along the lower west bank of the Mississippi.

“For the few communities south of the Pointe a la Hache, the study suggests building strong and high ring citadel levees around them and then connecting these communities with a bridge, much as the Florida Keys are,” Westerink said.

The researchers note that, historically, the design of Southeast Louisiana’s hurricane flood risk reduction system has hinged on raising and adding levees in response to river or hurricane events that impact the region. Now, it may be time to think and build smarter.

“The study suggests building smarter citadel flood protection systems in the delta instead of long north-south linear systems that follow the river,” Westerink said. “This reduces flooding risk, works with nature in that sediments can get to the delta from both the river and from hurricanes and thus build up the delta, and reduces levee construction costs by billions.”

The group’s study appears in the Journal of Waterway, Port, Coastal and Ocean Engineering.