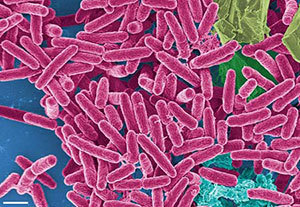 A new study by a team of researchers that includes University of Notre Dame scientists Joshua Shrout and Mark Alber provides new insights into the behavior of an important bacterial pathogen.

“While this ubiquitous environmental bacterium rarely infects healthy people, it is a common pathogen among susceptible populations, such as individuals with cystic fibrosis, burn victims, ventilator patients and those who have had intestinal reconstruction,” Shrout said. “Pseudomonas aeruginosa is among the most common hospital-acquired infection pathogens and causes of death for intensive care unit patients.”

The researchers investigated, using combination of experiments and computational modeling, how bacteria swarm in groups containing millions of cells.

“We show in this paper that appendages of this bacterium called ‘pili’ link together to alter group motion and give swarming groups a form of braking power,” Alber said. “These bacterial swarms are able to change their motion as a group to avoid toxins. We showed this by demonstrating that bacteria with pili will avoid an area containing antibiotic — but cells without these pili do not slow their motion, swarm into the antiobiotic region, and are killed.”

Although the study focused on Pseudomonas aeruginosa, the results potentially offer insights into the behavior of other bacteria.

“This is a very fundamental discovery that gives us insight into the response and control of bacteria that alter their behavior as an entire group,” Shrout said. “This knowledge may be useful to understand how pathogens and other bacteria can evade compounds we might use to control them and advance our understanding of how some infections become so difficult to cure.”

“The next steps are to more specifically determine how individual cells are behaving in these swarming groups to detail how they coordinate their motion and then apply this knowledge to understand colonization of different types of surfaces such as human cells or medical plastics,” Alber said.

The study appears in the Proceedings of the National Academy of Sciences (PNAS). The research was funded by a grant from the National Institutes of Health.