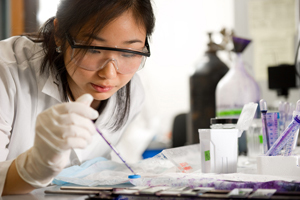 Niemann-Pick Type C (NPC) disease is a rare, fatal neurodegenerative disease for which there is currently no cure. NPC primarily strikes children before and during adolescence and affects one in every 150,000 children. The disease causes cholesterol and other lipids to build up in the body’s cells, which results in symptoms such as delayed motor development, deterioration of memory and balance, and seizures.

New research from the University of Notre Dame may lead to a therapy for NPC. Researchers are Kasturi Haldar, the Nieuwland Professor in the Department of Biological Sciences and the Parsons-Quinn Director of the Boler-Parseghian Center for Rare and Neglected Diseases in the College of Science, and Dr. Suhail Alam and Michelle Getz in the Center for Rare and Neglected Diseases.

The researchers used an existing FDA-approved drug in a novel approach to treatment with promising results. The finding involves substances known as histone deacetylase inhibitors (HDACi). HDACi are a large class of compounds designed to treat many genetic diseases. They include drugs for cancers and potentially neurological disorders.

“Unfortunately, HDACi do not cross from the blood to the brain efficiently and, in higher doses, quickly become toxic because the histone deacetylases that they block are needed for brain development and function,” Haldar said.

Haldar, Alam and Getz developed and tested a new triple combination formulation that was used to deliver the FDA-approved HDACi prescription medication Vorinostat across the blood brain barrier and into brain tissue of mice with Niemann-Pick Type C disease. They also developed a long-term treatment regimen with the formulation that is safe, improves brain function, treats the symptoms of NPC and prolongs mouse survival.

“These findings suggest that this new Notre Dame triple combination formulation may be developed as a therapy for Niemann-Pick Type C disease and possibly other types of neurological diseases as well,” Haldar said.

The research findings have led to the establishment of a new company, NPC Therapeutics, by Notre Dame alumni William Claypool, class of ’72, and Dennis Wilson, class of ’73.

“These are very exciting results,” William K. Warren Foundation Dean of the College of Science Mary Galvin said. “It is now important that the researchers determine whether the ND triple combination formulation is safe and effective in humans.”

“We are very hopeful because all components of the formulation are separately approved for human use,” Haldar said. “The best dosing for both adults and children will have to be developed. We will also test how broadly the formulation can be used with other neurological disorders. HDACi have potential to treat many other rare neurological diseases, and our study suggests that the formulation may possibly also act with other rare diseases like Gaucher’s Krabbe and Morquio, which are also rare lysosomal disorders like Niemann-Pick Type C, and rare neurological diseases like nonketotic hyperglycinemia as well as more prevalent disorders like Alzheimer’s and Parkinson’s. Studies on other disorders will first be done on mouse models of the disease to establish that the formulation is safe and active in treating these diseases.”

“This new study provides a robust foundation from which to effectively guide development of therapies for NPC and possibly other rare disorders,” Crislyn D’Souza-Schorey, Pollard Professor and chair of Notre Dame’s Department of Biological Sciences, said. “It is also testament to our efforts to overcome the barriers and constraints associated with studying rare diseases and influencing change at the most fundamental level.”

The research findings appear in the journal Science Translational Medicine and can be found here: http://stm.sciencemag.org/content/8/326/326ra23.