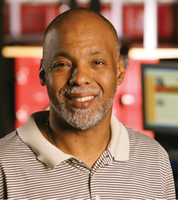 The University of Notre Dame’s College of Engineering has appointed Leo H. McWilliams director of the Minority Engineering Program (MEP).

McWilliams served most recently as co-course coordinator and an instructor for a first-year engineering course sequence. In addition to his work as an instructor for these courses, he also will now also be responsible for achieving the vision of MEP, which encompasses involving students in all aspects of academic life at Notre Dame, advocating for the needs of under-represented students and creating opportunities to bring together engineering faculty, alumni and students to work together to achieve success in their academic and professional endeavors.

Prior to joining the University in 2002, McWilliams served as a principal engineer at Honeywell International in South Bend, where his duties included the investigation of advanced control concepts for gas turbine engines, the modeling and analysis of hydromechanical and electronic controls for gas turbine engines, and the design, analysis and integration of landing systems for aircraft.

The MEP was established in 1987 to encourage minority students in their pursuit of undergraduate degrees in engineering. Although the primary activities in the program are aimed at recruitment, retention and engagement of students, leadership skills also are cultivated throughout the MEP via lectures, workshops, student competitions, scholarships, internships and career placement activities.

Upon graduation, students become part of the MEP Alumni Network, a group of engineering graduates who make themselves available to answer the questions and concerns of current engineering students. The network also serves as a resource for University students whose internships require them to live away from family and friends.

More information on the MEP can be found on the Web at http://www.nd.edu/~mepnd.