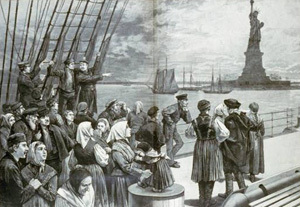 Bridget O’Malley was just 11 years old in 1909 when she left her family in Ireland and sailed to Boston. She was the youngest passenger listed on the ship’s manifest, which included one striking detail: Bridget was traveling alone.

Why would a parent send away an 11 year-old girl? Why was she alone? What kind of life awaited her in Boston?

Ian Kuijt, a professor of anthropology at the University of Notre Dame, explores these questions and broader issues of emigration through the lens of an archeological anthropologist – just one of three perspectives offered to students in the class “The Irish in the U.S.: Comparative Perspectives on being Irish and Irish American.”

“I want students to dig deeper,” Kuijt says, “to think about the famine in terms of human faces and stories, not just statistics. I want them to understand that the famine and emigration was personally disruptive and painful, and as a global event changed the political and economic context of the world in remarkable ways.”

Taught by three Notre Dame scholars – Brian Ó’Conchubhair, Patrick Griffin and Kuijt, “Irish in the U.S.” explores the interconnectedness between Ireland and America from linguistic/cultural, historical and anthropological perspectives.

It’s easy for 21st century Americans to romanticize Irish emigration, with iconic Irish American success stories like the Kennedy family, whose patriarch, Joseph Kennedy, was the son of immigrants.

“Not every story is a success story of rags to riches,” says Ó’Conchubhair, associate professor in the Department of Irish Language and Literatures, “and we explore the bias and resentment the ‘famine Irish’ encountered on arriving in the States, and use that experience to promote awareness of social justice and ethical issues in our students."

Ó’Conchubhair examines the Irish/American experience from literary, cultural and linguistic perspectives, with a focus on implications of the famine on both the Irish language and on Irish and English literature.

Unlike any other immigrant group of the time, famine and post-famine Irish immigrants voluntarily “forgot” their native tongue in order to establish a physical and psychic space between them and their past. The Irish language was associated with poverty and illiteracy and English was viewed as the language of culture and progress. Consequently, native Irish speakers dropped their language.

In 1860, the population in New York City was 800,000 and 200,000 were Irish famine immigrants. Despite being among the poorest of immigrants, the Irish were able to flourish and impact American culture in a way no other groups had.

Griffin, a professor of history, examines how and why the Irish were able to thrive and succeed, even with brewing tensions within Irish America.

“Irish immigrants tended to their families, were able to save money and hold jobs,” Griffin says. “They were able to buy a slice of the American dream by sustaining each other through various practices.”

Griffin’s historical perspective also addresses the influence of Irish on American culture: politics, vaudeville, certain fashions, even American slang were shaped by the Irish, who “were on the edge of pop culture and who middle class Americans began to emulate,” Griffin says.