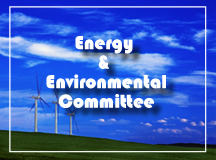 John Affleck-Graves, executive vice president of the University of Notre Dame, has reconstituted a group of faculty, staff and students called the Energy&Environmental Committee, whose members are to be directly involved in developing and promoting the Universitys environmental policies, including air quality and energy conservation.

Faculty appointees are Joan Brennecke, Keating-Crawford Professor of Engineering and director of the Notre Dame Energy Center; Frank Incropera, Brosey Professor of Mechanical Engineering; Leo Burke, associate dean and director of Executive Education; Ronald Hellenthal, professor of biological sciences; and Darcia Narvaez, associate professor of psychology. Junior Kerry OConnor is one of two student representatives; a second will be named later. The first meeting is expected to be held in coming weeks.

The University community is interested in assuring that Notre Dame follows a responsible environmental strategy that supports a healthy campus and the well-being of the area in which we live,Affleck-Graves said.My hope is that this committee will be instrumental in establishing an environmental and energy strategy and promoting a culture of environmental stewardship.

Consisting of eight faculty and staff, it was charged with studying the air quality on campus and its relationship to air quality in the surrounding county. Overall, the task forces findings were positive. It concluded the University is not a major contributor of such pollutants such as carbon monoxide, nitrogen oxides or volatile organic compounds, emissions that are commonly found around power plants such as the one at Notre Dame.

Campus air quality was negatively affected by industries such as steel mills that are located upwind ofSt. JosephCounty, the committee learned. The committee also explored illnesses related to air quality, finding that incidents of disease such as lung cancer mirrored those ofIndianain general.

Nevertheless, the task force urged the University to continue vigilant work to control emissions. And it concluded that there are proactive steps the University can take to promote a healthy campus environment. Identifying and publicizing plans for energy conservation and monitoring the Universitys environmental status are among its potential charges.

The committee reconstitutes one established in 1990 called the Environmental Issues Committee, whose primary charge was to help the University establish a smoking policy. That committees recommendations were adopted in 1992.