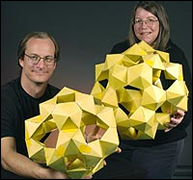 Researchers from the University of Notre Dame and Argonne National Laboratory have discovered a new class of materials that may help provide a better understanding of how radioactive materials behave in the environment.

Called actinyl peroxide compounds, the materials self-assemble into nano-sized, hollow cages that could have useful new electronic, magnetic and structural properties important to the emerging world of nanotechnology.

The new materials formed from uranium and neptunium peroxide solutions at room temperature. They consist of groups of 24, 28 or 32 identical polyhedra that are linked into clusters measuring about two nanometersbillionths of a meterin diameter.

No one has ever seen anything like these,Peter Burns, chair of Notre Dames Department of Civil Engineering and Geological Sciences, said.These very small nanoscale aggregates of actinides in solution could play an important role in actinide transport in the environment.

The researchers discovered the materials during studies conducted within the Universitys Environmental Molecular Science Institute (EMSI).Argonneand Notre Dame are partners in the joint Department of Energy/National Science Foundation institute that is funded to explore the basic science of molecular interactions involved in the transport of nuclear materials in the environment.

Actinides are the radioactive elements that constitute the bottom row of the Periodic Table and their chemistry is drawing increased interest from scientists.

Since there are no historic examples, there is a huge void in understanding, so we are investigating almost any situation we think could be found in nature related to nuclear materials interacting with the environment,Lynda Soderholm, an Argonne chemist, said.

Burns and Soderholm feel that these actinyl-nanospheres may form in alkaline mixtures of nuclear waste, such as the high-level nuclear waste tanks found at theHanford,Wash., site.Hanfords nine nuclear reactors produced plutonium for four decades, leaving more than 50 million gallons of high-level liquid waste in 177 storage tanks and billions of gallons of contaminated groundwater.

If these actinyl-nanospheres are forming at Hanford, and other sites, such as the Savannah River plant in South Carolina, we should know about it and understand more about it,said Burns, Henry J. Massman Jr. Associate Professor of Civil Engineering and Geological Sciences .

Nanoparticles are believed to be important in environmental systems because they often form at low temperatures, can impact the transport of heavy metals and radionuclides in geologic fluids and are small enough that their properties can vary with their size.

When materials are created from particles just a few molecules across and measured in the billionths of meters, they have enhanced properties when compared to materials created from bulk.

These things are in an unusual size range that provides an opportunity to understand well-defined nanospheres,Burns said.The clusters exist in solution and build up into molecular crystals much like atoms grow in molecules.

They are not dissolved in the normal sense of what we think of a cation (an atom or group of atoms carrying a positive charge) being surrounded by water, but they are not big enough to be a solid in suspension. They are in an intermediate range.

The research began at Notre Dames EMSI but moved toArgonnebecause its Chemistry Division has hot labs that enable the research on neptunium to be performed safely.Argonnes Advanced Photon Source, the hemispheres most brilliant source of research X-rays, also was used analyze the solution.

Burns and Soderholm plan to focus on the self-assembling aspect of these materials. Reproducible, self-assembling nanostructures are the currentHoly Grailin the nanotechnology world. When they can be manufactured, industry hopes to use them as catalysts, computer chips, solar cells, flexible batteries and data storage devices.

A postdoctoral researcher and several graduate and undergraduate students are participating in the ongoing research.

The research results were published in the Angewandte Chemie International, one of the leading academic journals in the chemical field.