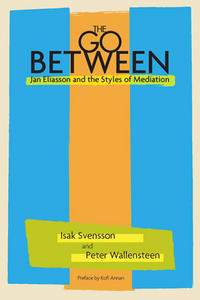 Over the last 20 years, more wars have ended through mediation than in the previous 200. How can international mediators be even more successful?

A new book co-authored by peace scholars Isak Svensson and Peter Wallensteen, a professor at the University of Notre Dame’s Kroc Institute for International Peace Studies, considers the art of mediation and offers lessons for mediators and researchers alike.

“The Go-Between: Jan Eliasson and the Styles of Mediation” draws on the detailed diaries, notebooks and experiences of Swedish diplomat Jan Eliasson, who was deeply involved in mediation efforts ranging from the Iran-Iraq War in the 1980s to the ongoing conflict in Darfur. During his 40-year diplomatic career, Eliasson held posts including Sweden’s ambassador to the United States, president of the United Nations General Assembly and U.N. Special Envoy to Darfur.

The book, published by the United States Institute of Peace, examines multiple mediation styles. Some mediators generate momentum for talks between warring parties, while others operate more like chess players, trying to “force” parties to act in certain ways, Wallensteen says.

“Success should not be defined only in terms of peace agreements, Wallensteen says. “Reducing the amount of violent conflict between parties can also be considered a success.”

“The Go-Between” provides the basis to “test, illustrate and expand our knowledge about the practice of mediation,” says Chester A. Crocker, James R. Schlesinger Professor of Strategic Studies at Georgetown University. “The book belongs on the desk of any practitioner, scholar or student who is serious about international conflict management.”

“The great strength of this book is its mapping of the conditions under which a go-between can most successfully define, enter, shape, and eventually exit, a principled mediation process,” says Melanie Greenberg, president of the Cypress Fund for Peace and Security.