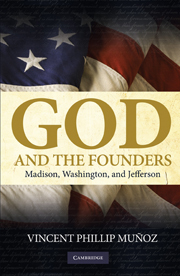 Vincent Muñoz, associate professor of political science at the University of Notre Dame, questions the traditional view of the founding fathers’ stance on religious liberty in “God and the Founders: Madison, Washington, and Jefferson,” recently published by Cambridge University Press.

In the book, Muñoz rejects the consensus view that the founding fathers agreed about the meaning of religious liberty by showing how Presidents James Madison, George Washington and Thomas Jefferson disagreed about the separation of church and state. He explains why the founders’ disagreement means that no single church-state position can claim the exclusive authority of America’s founding history. In doing so, Muñoz reveals how the founders have been misused by Supreme Court justices, demonstrates the limits of “originalism” in church-state jurisprudence, and explains how the founders’ different positions would adjudicate contemporary church-state controversies.

Muñoz writes and teaches in the fields of constitutional law, American politics and political philosophy. His recent research has focused on the theme of religious liberty and the U.S. Constitution.
After earning his undergraduate degree from Claremont McKenna College, Muñoz earned his master’s degree from Boston College and then returned to Claremont for his doctorate.