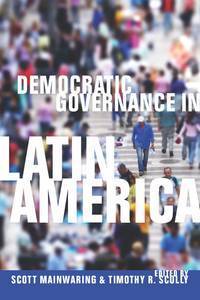 In “Democratic Governance in Latin America,” Mainwaring and Father Scully gather a renowned team of contributors to explore why some policies and some countries in Latin America been more successful than others in meeting the challenge of governing both democratically and effectively.

Good democratic governance entails looking at the policy results of governance, not how democratic a regime is. In a book intended to illuminate policy debates as well as make an academic contribution, the editors make a point of enriching the debate with a wide range of voices.

Contributors to the wide-ranging, interdisciplinary project encompass not only well-known political scientists and economists, but six distinguished Latin American leaders with strong academic credentials, including Fernando Henrique Cardoso, the former president of Brazil; Alejandro Foxley, former finance minister and minister of foreign affairs in Chile; and José Miguel Insulza, the secretary general of the Organization of American States.

Other contributors include Notre Dame political scientist Daniel Brinks and a number of former visiting fellows at Notre Dame’s Kellogg Institute of International Studies, where Mainwaring serves as director and Brinks and Scully are faculty fellows.

The book originated in a conference held at the Kellogg Institute in October 2005 with funding from the Coca-Cola Company.