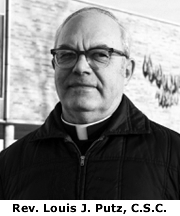 His English was fluent and eloquent, spoken in a thickly German accent and a formidable bass voice, perfect for quick salutations and abrupt orders, but always suffused with a paradoxical warmth.He was a Bavarian peasant, short and stoutly built, and from behind the coke-bottle bottom lenses of his spectacles his badly aligned eyes never seemed to miss much even when they were closed and he appeared to be dozing.

In 1998, deep in the winter of the year he died, his 89 th , he was seen shoveling his own car out of a snowdrift in the Corby Hall parking lot.Even the most solicitous passersby feared to intervene.No less than the blizzards of that year, the formidable Ludwig Josef Putz was difficult to ignore, a force of nature and an arguably alarming sign of Gods attention to an all-too-inattentive people.

This Holy Cross priest, whose every utterance seemed to end with an exclamation point, is appropriately memorialized in a biography titledYou Are Church!The Life and Times of Louis J. Putz, C.S.C., Prophet, Servant and Visionary,by Bob Ghelardi, a 1959 alumnus of Notre Dame, where for six decades FatherLouiePutz was all of those things.

Here is how his friend, colleague and brother, Rev. Theodore M. Hesburgh, C.S.C., emeritus president of Notre Dame, summarized Louies curriculum vitae in a foreword to the book:

He lived a life filled with fresh initiatives, startingwith creative work with students of Notre Dame and across North America, later with publishing ventures which announced (largely through translations) the transformations of the Second Vatican Council for an American public, then responding to the call of his Congregation of Holy Cross to implement the council as rector of Moreau Seminary atNotre Dame, after which he brought the message of lay involvement in the Kingdom of God to retired folks.

Permitted by well-meaning but feckless relatives to leave Germany for America to enroll in the seminary at far-off Notre Dame, he collapsed into bed in Walsh Hall on Aug. 25, 1923, at 4 a.m., fresh off the Grand Trunk railroad from Ellis Island, a starving and bewildered 14-year old with no English and a note readingDeliver me to South Bend, Indiana,pinned to his lapel.After a few hours of sleep, he went to Mass in the Crypt chapel beneath the Basilica of the Sacred Heart, and began a career that profoundly enriched the University, the Congregation of Holy Cross, and a generation of American Catholics.

Ghelardis biography of Putz details a life and career deeply entangled in the dramas of the last century:A rustic childhood in a defeated Germany, a precarious emigration to New York and the New World, trans-Atlantic seminary studies perilously interrupted by World War II, a ministry in Notre Dames seminary and campus residence halls which anticipated the Second Vatican Council, and a retirementin which Putz became the chaplain for a nationwide community of fellow senior citizens, orThird Agers,as he preferred to call them.

In his most active years at Notre Dame, he launched an occasionally controversial Young Christian Students group, modeled on more radical initiatives of European Catholic labor organizations.He also served as rector of Cavanaugh Hall and later of what is now Moreau Seminary.In his spare time, he also founded Fides Publishers, a company which made previously untranslated works of European theologians available to literate Catholic lay people.

Long after reaching the age when many of his brother priests were dozing on the Corby Hall porch, Father Louie establishedSouth Bends Harvest House, a center devoted to the physical, spiritual, and cultural needs of Third Agers, and the Forever Learning Institute, an inexpensive continuing-education program in which he remained active until days before his death.Both projects became models for similar initiatives inPhoenix;Houston;Galveston,Texas;Wichita,Kan.; andCalifornia’sCoachellaValley.

To be an apostle,he once said in a homily for Pentecost Sunday,you need not necessarily become a social worker, or a foreign missionary; you need not be a dynamic orator.You need merely to be keenly alive to the needs of your neighbor, the neighbor of your immediate environment.Proximus,the Latin word for neighbor, is the one next to you, the one who is frequently overlooked in our ministrations of charityTimely reminders, kind advice, a kind word, or sympathetic concern might save a broken spirit or otherwise lost soul.Real, effective, personal charity makes us good and patient, not arrogant, nor repulsive.It is the master key that will open every heart, acquired by a constant doing of little acts and services, a readiness to serve others and sacrifice oneself.

Louie Putz practiced what he preached.