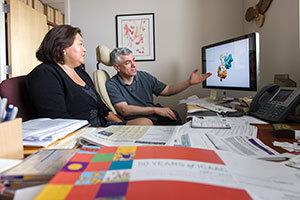 Estimates of deaths from methicillin-resistant Staphylococcus aureus (MRSA) in the United States range upwards of 19,000 annually. Around 1960, when Staphylococcus aureus developed resistance to first-generation penicillin, methicillin and other second-generation beta-lactam antibiotics were adopted to fight the illness. The modern variants of the bacterium have developed resistance to the four drugs now used to treat it.

A team of researchers led by Shahriar Mobashery and Mayland Chang at the University of Notre Dame has discovered a promising new antibiotic, a vital weapon against disease as pathogens evolve to develop resistance to long-used drugs. The antibiotic proved effective in a mouse model infected with MRSA, a bacterium that emerged in hospitals in the 1960s and has spread to the larger population since the 1990s.

Mobashery and Chang adopted an unprecedented strategy in inhibiting the way the pathogen builds its cell wall. They conducted a rapid computational screening of 1.2 million drug-like compounds that might interfere with the process, then refined the filtering in stages until they identified 118 lead compounds to test for antibacterial activity against a range of species. The lead quinazolinone compound that emerged from these efforts underwent additional rounds of synthesis and evaluation, producing the antibiotic, which exhibited activity in a mouse infection model.

The researchers said the discovery has implications beyond MRSA as pathogens continue to evolve resistance to existing drugs. “Antibiotics are losing effectiveness,” Mobashery said. “This means that infections cannot be treated effectively. Some infections by pathogens kill as many as 50 percent of the patients. But the problem goes way beyond this. We depend on antibiotics to a degree that often might not be intuitively obvious. Without antibiotics, we could not perform many medical treatments. One could not have a hip surgery, or an athlete could not have a knee repaired.” Cancer treatment would be virtually nonexistent, and most elective surgeries and some essential ones could no longer be performed in the absence of antibiotics.

Mobashery said, “We assume that antibiotics will always be there, but this is not for certain.”

The breakthrough was published this week in the Journal of the American Chemical Society in an article titled, “Discovery of Antibiotic (E)-3-(3-Carboxyphenyl)-2-(4-cyanostyryl)quinazolin-4(3H)-one.”