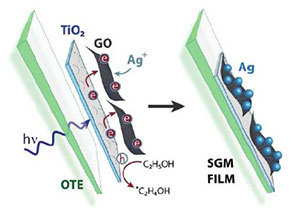 Many organic contaminants in the air and in drinking water need to be detected at very low-level concentrations. Research published by the laboratory of Prashant V. Kamat, the John A. Zahm Professor of Science at the University of Notre Dame, could be beneficial in detecting those contaminants.

The Kamat laboratory uses Surface-Enhanced Raman Spectroscopy to make use of silver nanoparticles to increase the sensitivity limit of chemical detection. Researchers in this study have prepared a semiconductor-graphene-metal film that has distinct advantages: The absorption of organic molecules on the film’s graphene surface increases the local contaminant concentration adjacent to silver nanoparticles.

The researchers have investigated the use of graphene oxide films in which the semiconductor titanium dioxide (TiO2) and metal nanoparticles are deposited on opposite sides of the graphene surface. “We are currently working toward the detection of environmental contaminants at even lower levels,” Kamat says. “Careful control of metal size and loading will be the key to optimize strips for testing water quality.” 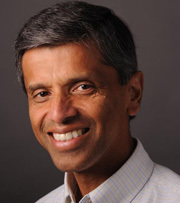 Graphene, a two-dimensional crystalline form of carbon, is known for its remarkable mechanical strength, very high thermal and electrical conductivity and broad variety of applications. While the conducting properties of graphene sheets deposited on various substrates are well understood, the Kamat group has demonstrated that the transport of electrons is not limited to the 2-D plane. Here, the hopping of electrons from one side of the graphene allows for the side-selective deposition of silver nanoparticles.

“Another potential application is in the area of photocatalytic generation of solar fuels," Kamat says. "For example, having semiconductor nanoparticles on one side of a graphene sheet and a metal catalyst on the other side, one can create a hybrid assembly that can selectively split water into oxygen and hydrogen.”

The paper, “Electron Hopping Through Single-to-Few-Layer Grapheme Oxide Films: Side-Selective Photocatalytic Deposition of Metal Nanoparticles,” was published recently in the Journal of Physical Chemistry Letters. Authors are Ian Lightcap, Sean Murphy, Timothy Schumer and Kamat. The research was supported by the Office of Basic Energy Sciences, Department of Energy.