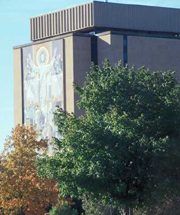 The National Endowment for the Humanities (NEH) has awarded the University Libraries of Notre Dame a $450,000 Preservation and Access Grant to help support phase one of a three-phase project titled “Preservation of Catholic Tradition Collections.”p. The project is aimed at ensuring the preservation of, and increasing access to, more than 15,000 endangered 19th and early 20th century monographs documenting the Catholic tradition. The Universitys collection of Catholic materials is housed in the Hesburgh Library and contains some 50,000 volumes supporting Catholic scholarship. It is one of the most comprehensive and significant collections of its kind.p. During this first, two-year phase, approximately 4,200 volumes will be preservation microfilmed and 1,400 volumes will receive conservation treatment, preserving and ensuring their availability to future generations of scholars.p. Elizabeth Dube, head of the University LibrariesPreservation Department, will serve as the grant’s principal investigator.p.