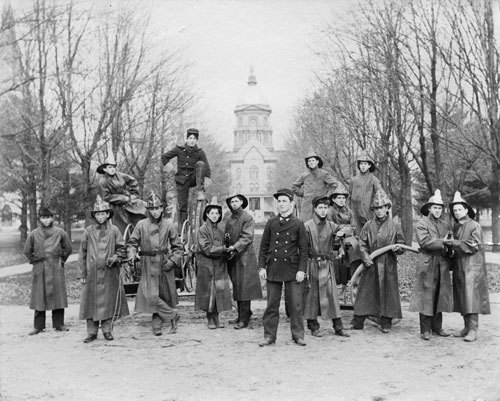 On March 20, 1879, Notre Dame’s founder, Rev. Edward Sorin, C.S.C., was feeling fretful, and he unburdened himself of a persistent worry in a memo to Rev. William Corby, C.S.C., then the University’s president.

“I am glad to find you, as I am myself, terribly afraid of fire,” Father Sorin wrote. Recalling such conflagrations as the fire which had come close to annihilating nearby Chicago a few years earlier, he added thankfully that at Notre Dame “Providence has given us all the securities that can be wished for, but there is no guarantee against carelessness as an Institution. A public habitual dread is our only safety.”

As if cruelly to illustrate Father Sorin’s point, one month and three days after he had written to Father Corby, a mysterious fire broke out on the roof of Notre Dame’s Main Building, destroying the entire structure within an hour. Notre Dame students and faculty had valiantly struggled to form a bucket brigade, and volunteer firemen from South Bend had arrived with a horse-drawn steam-driven fire engine, but only in time to watch the last glowing timbers collapse. Two hours later, four other campus buildings had been reduced to cinders. There were a few minor injuries and no deaths, and a southwesterly wind had spared what is now the Basilica of the Sacred Heart from the flames, but to all intents and purposes, Notre Dame was no more.

But Father Sorin could yield to no intent or purpose that was not his own. “I built it too small,” he said. “So, tomorrow, as soon as the bricks cool, we will rebuild it, bigger and better than ever.”

They did just that, and the University of Notre Dame Fire Department (NDFD), which celebrates its 135th birthday Friday (Nov. 21) thereby became a crucial component of the bigger and better Notre Dame which arose from those cooling bricks. The first university-based fire department in the nation, today it is also the oldest. 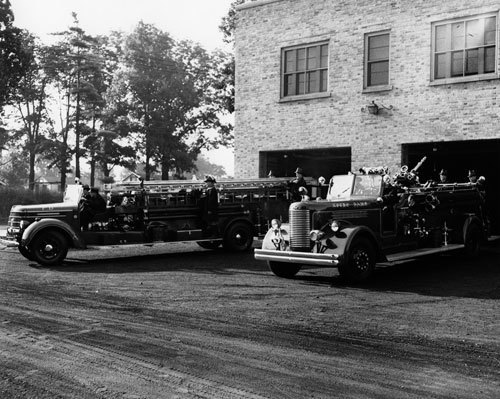 In those earliest days, it consisted of two hose companies of Holy Cross brothers, seminarians and Notre Dame students working out of a firehouse furnished with two bays to hold the hose carts and a tower for hanging wet hose to dry. By 1900, the Notre Dame Scholastic magazine could boast that the NDFD provided the “best fire protection in America,” and “could deliver over 2,000 gallons of water per minute within 5 minutes of the alarm.” That old firehouse, just northeast of the resurrected Main Building, was torn down in 1945, shortly after the department moved into its present headquarters across Holy Cross Drive from the University Power Plant.

The NDFD today has 18 full-time members who respond to some 1,800 incidents a year. “It’s really a town of more than 15,000 people,” says fire chief Bruce Harrison of the 46556 ZIP code area, the department’s principal responsibility.

NDFD relieves the city and county of the expense of fire protection for Notre Dame as well as Holy Cross and Saint Mary’s colleges, and it also routinely assists neighboring fire departments. Last year, in addition to the 1,765 emergencies NDFD addressed in the Notre Dame community, its firefighters joined those of the Clay Fire Territory department in responding to six incidents and those of the South Bend fire department in responding to two others, and this year the NDFD has assisted Clay Fire Territory in four responses and the New Carlisle fire department in one other.

NDFD’s first and most visible responsibility, the provision of fire suppression, rescue and emergency medical services, requires three rotating 24-hour firehouse shifts, each staffed with a captain, lieutenant, and two firefighter/emergency medical technicians. That responsibility intensifies sharply on football game weekends, when the population of the 46556 ZIP code area multiplies almost tenfold. “Nobody here gets a game day off,” Harrison says.

But Harrison insists that much of NDFD’s most important work is done away from the firehouse and without its state-of-the-art engines, trucks, ambulances and squad cars.

“I believe we’re a well-regarded fire department, and I’m proud of this group,” Harrison says. “Even while we’re one of the busiest ‘response’ departments in the area, we’re also out and around every day, inspecting and going over all the critical infrastructure of the campus.”

That infrastructure includes building fire alarms, water-based automatic fire sprinkler systems and specialized suppression systems for high hazard areas. The campus may indeed be a “town,” but it is a town which includes laboratory complexes as well as residence halls, which means, as Harrison puts it, “There’s no such thing as a small fire on a campus.”

“Most of our community is made up of the students who live in those residence halls,” Harrison says, “and in all of our work, from fire prevention and suppression through safety education, we have to be as mindful of them as if we were standing in for their parents. That’s a working piece of how we manage things here, and to leave that piece out would be a breach of trust.”