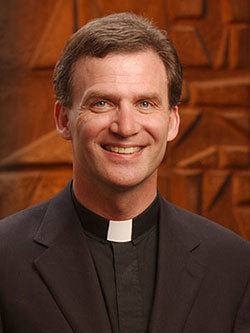 Rev. Daniel G. Groody, C.S.C., associate professor of theology and director of the Center for Latino Spirituality and Culture at the University of Notre Dame’s Institute for Latino Studies, has received the 2012 Touchstone Award from the National Federation of Priests’ Councils (NFPC).

The NFPC annually gives the Touchstone Award to a Catholic priest “whose service in the Gospel of Jesus Christ exemplifies the purposes and goals of the Federation.”

In announcing the award, the NFPC, which represents 26,000 priests nationwide, praised Father Groody’s work in the Latino community and his scholarship in migration issues and theology.

Father Groody spent many years doing pastoral work and research in Latin America and along the U.S.- Mexican border, particularly in the Coachella Valley of California, where he worked from 1997 to 1999. In addition to the numerous books and articles he has written on U.S. Latino spirituality, globalization and the relationship of Christian spirituality to social justice, he has produced documentary films including “One Border, One Body: Immigration and the Eucharist” and “Dying to Live: A Migrant’s Journey.”