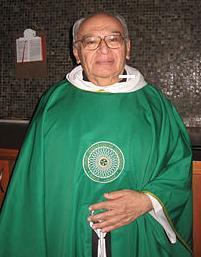 Rev. Gustavo Gutierrez, O.P., John Cardinal O’Hara Professor of Theology at the University of Notre Dame, will receive the Niebuhr Medal from Elmhurst College in a Sept. 20 ceremony.

The highest honor given by Elmhurst College, the Niebuhr Medal is presented in recognition of “extraordinary service to humanity” and the advancement of “the tradition of Reinhold and H. Richard Niebuhr, both Elmhurst College alumni and widely regarded as two of the most influential and compassionate theologians of the last century.” Previous recipients include the Nobel laureates Elie Wiesel and Lech Walesa, historian Arthur Schlesinger, and Cardinal Joseph Bernardin.

Father Gutierrez, a member of the Notre Dame faculty since 2001, is widely credited as the author of the foundational text for liberation theology, "A Theology of Liberation.” The movement launched by his work rapidly became one of the most influential in contemporary theology by calling attention to the Church’s vocation to resist the oppression of the poor. Other books he has written, which similarly concern theology, spirituality and Latin American history, include ‘We Drink From Our Own Wells: The Spiritual Journey of A People,” “On Job: God-Talk and the Suffering of the Innocent,” “The Truth Shall Make You Free,” “The God of Life,” and “Las Casas: In Search of the Poor of Jesus Christ.”

Born in Lima, Peru, in 1928, Father Gutierrez studied psychology and philosophy in Belgium at l’Universite Catholique de Louvain and earned his doctorate at l’Universite Catholique de Lyon in France. He returned to Peru to teach at the Pontifical University of Peru in Lima, preferring to live and work in parishes in the slums of the city rather than in the more comfortable neighborhood surrounding the university.

In addition to serving as a professor at the Pontifical University of Peru, Father Gutierrez has taught at many major universities in North America and Europe. He is a member of the Peruvian Academy of Language, and in 1993 he was awarded the Legion of Honor by the French government for his work for human dignity in Latin America and the Third World. He also was awarded Spain’s 2003 Prince of Asturias Award for Communications and the Humanities.