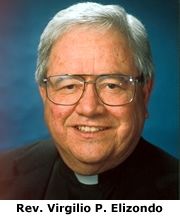 The award, which is the CTSAs highest honor, memorializes the most prominent American Catholic theologian at the Second Vatican Council, and a principal author of the Declaration on Religious Freedom (Dignitate Humanae), one of the councils most important teaching documents.

A member of the Notre Dame faculty since 2000, Father Elizondo is a native ofSan Antonio,Texas, where his Mexican immigrant parents owned a grocery store and where he himself spent many years as the pastor of San Fernando Cathedral.The Sunday Spanish Mass at which he presided was televised and carried via satellite from San Fernando Cathedral to more than 1 million households.

Before being ordained a priest for the Archdiocese of San Antonio in 1963, Father Elizondo was graduated from Saint Mary’s University, where he majored in chemistry and considered applying to medical school. Deciding that he was called to the priesthood, he entered Assumption Seminary inSan Antonio, largely because he wanted to stay in his hometown.

During his early years as a priest, Father Elizondo worked in parishes, but his ministry took a more scholarly turn in 1965 when Archbishop Robert E. Lucey appointed him archdiocesan director of religious education. Father Elizondo also served as Archbishop Lucey’s translator and aide during the 1968 meeting of Latin American Catholic bishops atMedellin,Colombia.

Father Elizondo became prominent as an advocate for the underpaid and exploited Mexican-American laborers in his archdiocese during the early 1970s.In 1972, as an increasingly self-conscious and confident Mexican-American community began to assert itself politically and culturally, he established theMexican-AmericanCulturalCenterat Assumption Seminary. He received two doctoral degrees in theology from the Institut Catholique inParisin 1978, and in 1979 he became an editor of the international theological journalConcilium.

Father Elizondos scholarship, a theological consideration of Mexican-American culture, has produced numerous books, includingThe Future is Mestizo,Galilean Journey,andThe Human Quest.He is a concurrent professor of Latino studies and a fellow in the Kellogg Institute for International Studies.