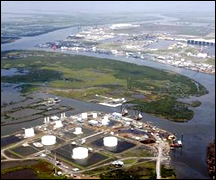 In the wake of Hurricane Katrinas devastation, Americans in many places can expect to pay more than $3 a gallon for gasoline until oil refineries damaged by the storm can return to full capacity, according to University of Notre Dame economist James Sullivan.

Gasoline futures on the New York Mercantile Exchange have been soaring since Katrina hit, and the White House has responded by releasing oil from the Strategic Petroleum Reserve,said Sullivan, assistant professor of economics and econometrics.This has eased the upward pressure on oil prices, but it will not quell the pressure on gas prices which are soaring because the nations already strained network of oil refineries is operating below full capacity due to damages from the hurricane.

Hurricane Katrina shut down about one-quarter of the crude oil that comes to Midwestern refineries – from Gulf of Mexico rigs or overseas oil going toGulfCoastports – and 40 percent of the refined product.This has forced gas prices to rise dramatically in the past two days.

Despite the higher cost for gasoline, price controls would only make matters worse by creating gas shortages and long lines at gas stations,Sullivan said.

_ _ TheChicagoTribune contributed to this report. _