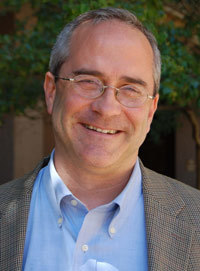 John P. O’Callaghan, director of the University of Notre Dame’s Jacques Maritain Center, has been appointed a permanent member of the Pontifical Academy of St. Thomas Aquinas.

Established in 1879 by Pope Leo XIII to promote the study of the thought of St. Thomas and to bring it into engagement with contemporary culture, the Pontifical Academy of St. Thomas has 50 members. O’Callaghan, an associate professor of philosophy at Notre Dame whose scholarship concerns medieval philosophy and Thomistic metaphysics, is one of four academy members from the United States.

“We Thomists don’t study Aquinas merely because we find his thought historically interesting, although it is,” O’Callaghan said. “We study it because we think lasting truth is to be found there. Notre Dame is nearly unique for the resources it devotes to continuing the study of, and promoting the relevance of St. Thomas and medieval philosophy to contemporary philosophy in the English speaking world. So I think this honor acknowledges the importance of philosophy in the Catholic tradition at Notre Dame as much as it honors me.”

A member of the Notre Dame faculty since 2003, O’Callaghan was graduated from St. Norbert College in 1984 and earned a master’s degree in mathematics from Notre Dame in 1986. He worked as an engineer in Boston for two years before returning to Notre Dame, where he earned a doctoral degree in philosophy in 1996. Before joining the Notre Dame faculty, he taught philosophy at Creighton University and the University of Portland. In 2006, he was appointed director of the Jacques Maritain Center, succeeding Notre Dame philosopher Ralph McInerny, who died earlier this year and was also a member of the academy.

“I am particularly honored that I enter the Pontifical Academy in the year Ralph departed,” O’Callaghan said. “He was a longtime member of the academy. I could never replace him, and I wish that we would have had the chance to be members together. But it is an honor to, in a sense, occupy his place, if I may, and continue to represent the University of Notre Dame within it, as he did.”

O’Callaghan was in Rome June 19 for his first academy meeting and to give a lecture on “The Paragon of Animals: How Like an Angel?”

Information on the Pontifical Academy of St, Thomas is available here.