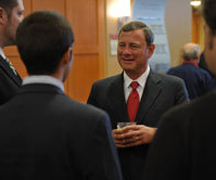 Robertstalk was presented as a conversation, with William Kelley, associate professor of law, sitting on stage with Roberts, asking the justice questions of his own and reading questions submitted by students. Kelley served in the White House as deputy counsel to the president from 2005 to 2007 and helped guide Roberts through the Supreme Court confirmation process.

It wasnt until law school that I knew I wanted to be a lawyer,he admitted.

He taught me that there is more to life than being a lawyer,Roberts said.He once told me, if you want to spend time with your young children, you have to do it while theyre young,laughed Roberts.

Over the course of 20 years as a litigator, Roberts argued before the Supreme Court 39 times.

I was nervous before every argument,he said.

Roberts offered advice to students considering a career in the courtroom:Preparation is key. Go over and over the case, write down a list of potential questions the judge may ask, and have friends or family review them with you again and again.

Roberts decided that, after two decades of arguing cases before the court, he wanted to view the law from the other side of the bench as a judge.

Its easier to ask questions than to answer them,he joked.

Roberts considers his job to beabsolutelyfun. He enjoys the variety of cases and the ability to decide how he is going to spend his day, whether its reading a brief, writing an opinion, or reviewing a case with his clerks. One example of Robertsapproach to his work is exemplified in the way he selects his law clerks. He has been known to ask interviewees to tell him a joke after quizzing them on their legal views.

We spend a lot of time together, and I want to know Ill enjoy their company,he said.

Some of that time is spent writing, reviewing and revising his opinions.

On the front of the opinion, for record-keeping purposes, I always write what draft it is. You will never see fewer than 20 drafts before I issue my final opinion,Roberts said.

Following his talk, Roberts mingled with students, faculty and staff at a reception and signed autographs.