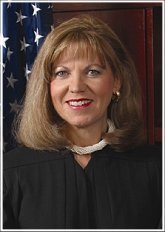 Superior Court Judge Joan Orie Melvin of Pittsburgh, a 1978 University of Notre Dame alumna, was elected Nov. 3 (Tuesday) to a seat on the Pennsylvania Supreme Court.

Melvin, a Republican, defeated her superior court colleague, Democrat Jack Panella, with 53 percent of the vote.

A native of Pittsburgh, Melvin majored in economics at Notre Dame, where she lived in Lyons Hall, and earned a law degree from Duquesne University School of Law in 1981.

A judge for more than 24 years, Orie Melvin first served in the Pittsburgh Municipal Courts, where she created the first domestic violence court in Pennsylvania. She was appointed to the Allegheny County bench in 1990 and seven years later became the first female Republican elected to the state Superior Court, where she has heard more than 8,000 cases.