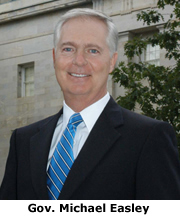 Gov. Michael Easley ofNorth Carolinawill deliver a speech titled theIntersection of Values and Politics in Modern American Life,at 2 p.m. Friday (Nov. 3) in Room 102 of DeBartolo Hall at the University of Notre Dame. The event is free and open to the public.

Sponsored by Notre Dames Department of Economics and Policy Studies, Easleys talk will focus on how the widely shared values of human dignity and concern for others affect the development and implementation of public policy.

Over the course of his governorship beginning in 2001, Easley has made NorthCarolinaa leader in education reform while maintaining a successful business environment for the state.

The first Catholic governor of the state, Easley was raised on a tobacco farm inNash County,N.C.He earned his bachelors degree in political science from theUniversityofNorth Carolinain 1972 and his law degree from North Carolina Central University School of Law in 1975.

Easley became one of the states youngest district attorneys in 1982. Elected asNorth Carolinas attorney general in 1992 and again in 1996, he put a particular emphasis on prosecuting hate crimes and child abuse and elder abuse cases.