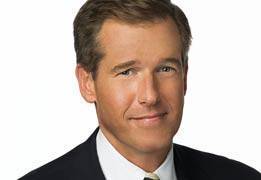 Brian Williams, anchor and managing editor of “NBC Nightly News,” will be the principal speaker and recipient of an honorary degree at the University of Notre Dame’s 165th University Commencement Ceremony on May 16 (Sunday) at Notre Dame Stadium.

“Mr. Williams is one of this country’s most respected and trusted journalists, and we are absolutely delighted that he has accepted our invitation,” said Rev. John I. Jenkins, C.S.C., Notre Dame’s president. “He has tremendous insight into the current state of our world, and I know his perspectives will be of great interest to our graduating Class of 2010.”

Williams became the seventh anchor and managing editor of the “Nightly News” in December 2004. Since then, he has reported from the field in New Orleans before and in the aftermath of Hurricane Katrina; in Rome for the funeral of Pope John Paul II; in Iraq for war and elections coverage; in Africa to focus on issues such as HIV/AIDS, poverty, disease and debt; and in Indonesia after the devastating tsunami of 2004.

He has received numerous awards for his work as both an anchor and reporter for NBC, including four Edward R. Murrow awards, five Emmy Awards, the duPont-Columbia University Award, the 2009 Walter Cronkite Award for Excellence in Journalism, and the industry’s highest honor, the George Foster Peabody Award.

Williams joined NBC News in 1993 and a year later was named the network’s chief White House correspondent. After two years covering the Clinton administration, he became the anchor and managing editor of “The News with Brian Williams,” an hour-long nightly newscast first on MSNBC and then CNBC. He was the anchor and managing editor of the Saturday edition of “Nightly News” for six years before becoming the weekday anchor.

In addition to his political coverage, Williams has reported through the years on the Middle East, the Sept. 11, 2001, terrorist attacks on the United States, the deaths of Princess Diana and John F. Kennedy Jr., and the crash of TWA Flight 800.

While covering the war in Iraq, Williams became the first NBC News correspondent to reach Baghdad after the U.S. military invasion of the city. Just days into the war, Williams was traveling on a U.S. Army Chinook helicopter mission when the lead helicopter was shot down by a rocket-propelled grenade. Williams spent three days and two nights in the Iraqi desert south of Najaf, with a mechanized armored tank platoon of the Army’s Third Infantry Division providing protection. During the war, Williams traveled to seven nations throughout the Middle East during his seven-week overseas deployment.

Williams is a frequent guest on “The Daily Show with Jon Stewart,” “The Tonight Show,” “Late Night with Jimmy Fallon” and “The Late Show with David Letterman.”

Before joining NBC News, Williams spent seven years at CBS as a correspondent and anchor in its Television Stations Division in Philadelphia and New York, during which time he covered the collapse of the Berlin Wall in 1989. He previously worked at WTTG-TV in Washington, and he started his television career at KOAM-TV in Pittsburg, Kan.

Prior to his broadcasting career, Williams worked in the White House during the Carter administration, beginning as an intern. He later worked as assistant administrator of the political action committee of the National Association of Broadcasters in Washington, D.C.

Raised in Elmira, N.Y., and Middletown, N.J., Williams served for several years as a volunteer firefighter in New Jersey.

Williams is a member of the Council on Foreign Relations in New York and a member of the Board of Directors of the Congressional Medal of Honor Foundation. He attended George Washington University and the Catholic University of America and previously has received six honorary degrees. He and his wife, Jane Stoddard Williams, have two children.